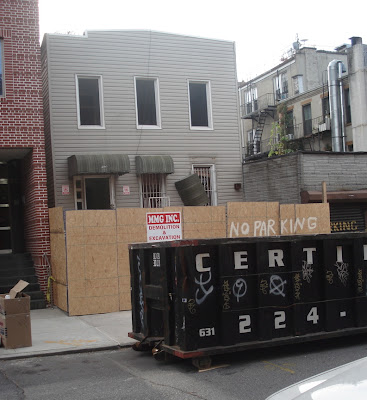 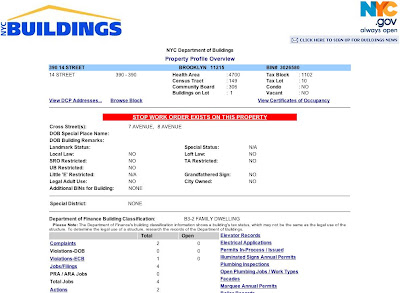 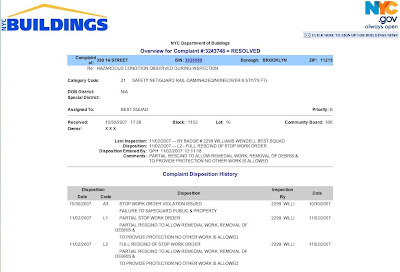 Stopping Work
Demolition has begun on 390 14th Street by Staten Island's own Mother of all Destruction, Marie Grasso and MMG Construction.
A STOP WORK ORDER for failure to safegaurd the public and property had been issued on 10/30, then...
a PARTIAL RESCINDED STOP WORK ORDER to remove debris and secure the site was issued on 11/02...
then on the same day according to information on the B.I.S. web page, the STOP WORK ORDER was fully RESCINDED. That's some pretty fast "paper" work and an excellent job at keeping the wrecking ball rolling. So fast that they didn't even have time to post any of this official documentation out front on their construction fence as of yet, including the original demolition permit. I wish we could get that kind of service from the D.o.B. but then maybe we aren't as good of customers as MMG is. Can anyone explain what happened to the DoB violation? I'm not sure how these kind of things work.

Here's a company, a house wrecker of ill repute, who's bad record precedes itself. If Ms. Lancaster, and her Department of Buildings is serious about "disrupting the business models" of bad girl companies that routinely, blatantly, disregard the safety of the public and property, why not start by suspended MMG's ability to secure new permits in Brooklyn until further notice.

Starting from a clean asbestos-free slate.
Once the 25'x100' lot, with its existing two story wood frame house, is cleared the owner and developer 390 Sim Development LLC, has plans to build a 4 story, 47' tall residential building with 6 units of housing.
Posted by IMBY at 8:52 PM