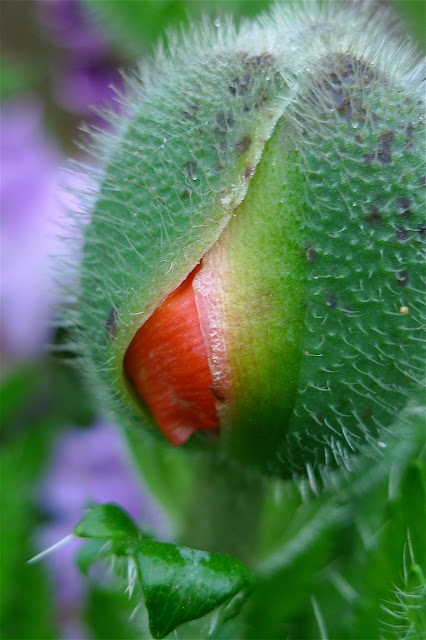 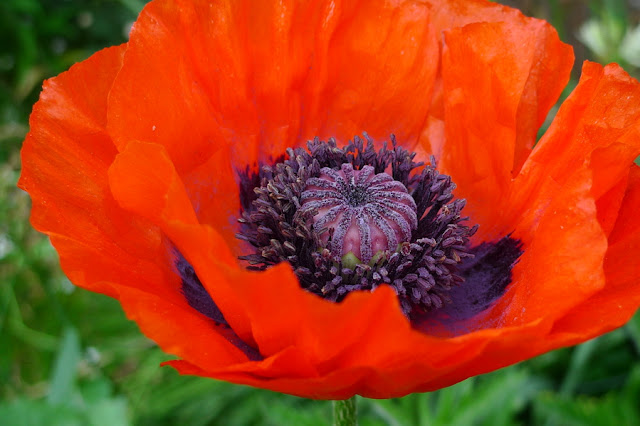 Posted by IMBY at 10:33 PM No comments: Links to this post

Rally to Save Firehouse Engine Company 220 Today and Tomorrow.

Mayor Bloomberg is proposing to close FDNY Engine 220 fire company at 530 11th Street in Park Slope, the engine company that keeps much of Park Slope & Windsor Terrace safe.
If the Bloomberg Administration is allowed to proceed with this closure (1 of 20 he is proposing around the city), arrival times at fires will increase dramatically in our neighborhood. According to stats provided to the City Council, the first arrival time would jump from 3:38 to 4:08 seconds (a 19% increase), and the second arrival time would go from 4:08 to 5:24 (a 30% increase). An extra minute to get an engine company to a fire can be the difference between life and death.
Mayor Bloomberg has his priorities in all the wrong places. Closing 20 firehouses would save $55 million, while the City's 'rainy day' fund has $1.9 billion on reserve. The mayor supports giving a new tax break to millionaires and billionaires (by opposing extension of the existing NYS millionaire's tax), and increasing spending on consultants by over $100 million, while putting lives at risk.

CLICK HERE FOR BRAD LANDER"S LINK TO SEND THIS SAMPLE EMAIL TO THE MAYOR.

I was very angry to learn of your plan to close FDNY Engine 220 at 530 11th street in Park Slope. I am writing to demand that you restore funding for E220.

This fire company keeps my family, and me, and much of Park Slope & Windsor Terrace safe. If you proceed with this closure, arrival times at fires will increase dramatically in our neighborhood – a 30% increase in the time before water is getting on the fire. An extra minute to get an engine company to a fire can be the difference between life and death.

There are many other choices you can make, rather than seeking to save $55 million by putting lives at risk. I would support an extension of the existing “millionaire’s tax,” (which would bring the City hundreds of millions), dipping into the City’s “rainy day” fund (which has $1.9 billion on reserve), or freezing spending on external consultants (which you are proposing to increase by $100 million in this year’s budget).

Please get your priorities straight, and don’t put lives at risk in our community. Save Engine 220. 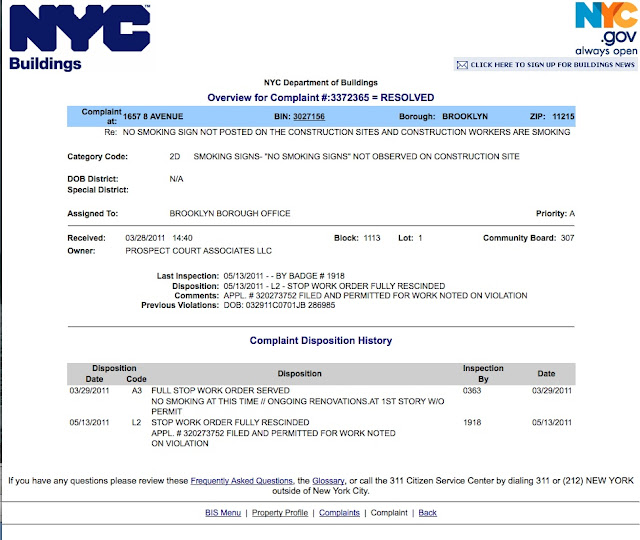 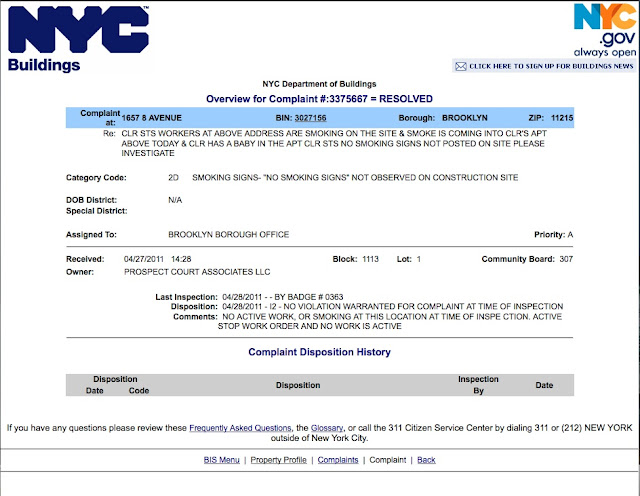 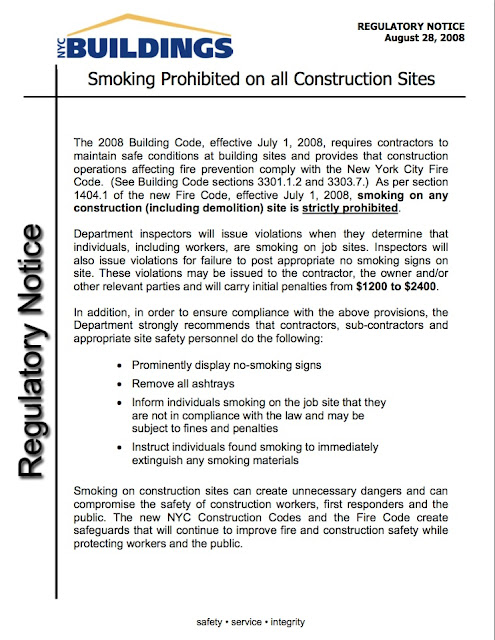 Protection Money
On a final note, anyone who is undertaking any kind of renovation or new construction work might be interested in the services of this company... DOB Alerts.


Let's be real, times have changed in Brooklyn.  The live and let live attitude towards undocumented renovation work has passed.  For better or worse, gone are the days when people with DIY skills could do work on their property without fear of an inspector showing up based on some disgruntled neighbor calling 311 to complain.
From the DOB Alerts website...
DOB Alerts will alert you of any complaints registered with the NYC Dept of Buildings so that you can solve the problem before a NYC Building inspector shows up with a summons or stop work order. Whether you’re a property owner, manager, developer, or contractor, you can save time, money, and avoid all the trouble with DOB Alerts.


"Along with phone and e-mail alerts, our sophisticated on-line system grants you the ability to view each property's complete complaint history, providing a wealth of information. As soon as someone contacts NYC's 311, we'll let you know, so that your project can move ahead safely and quickly, thanks to the power of knowing before." 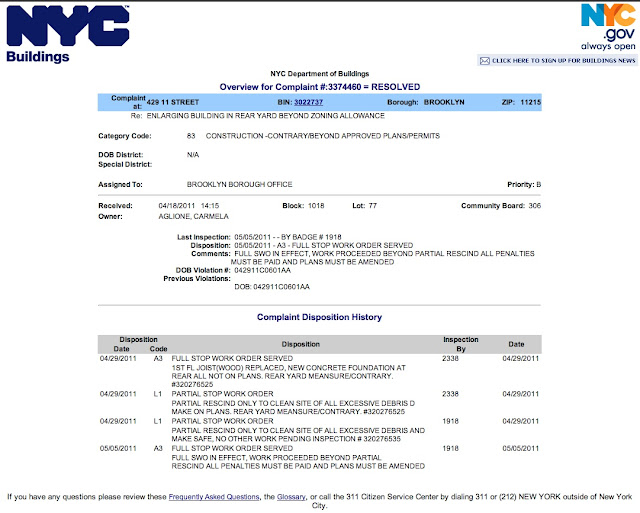 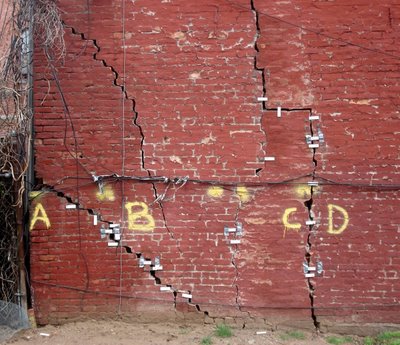 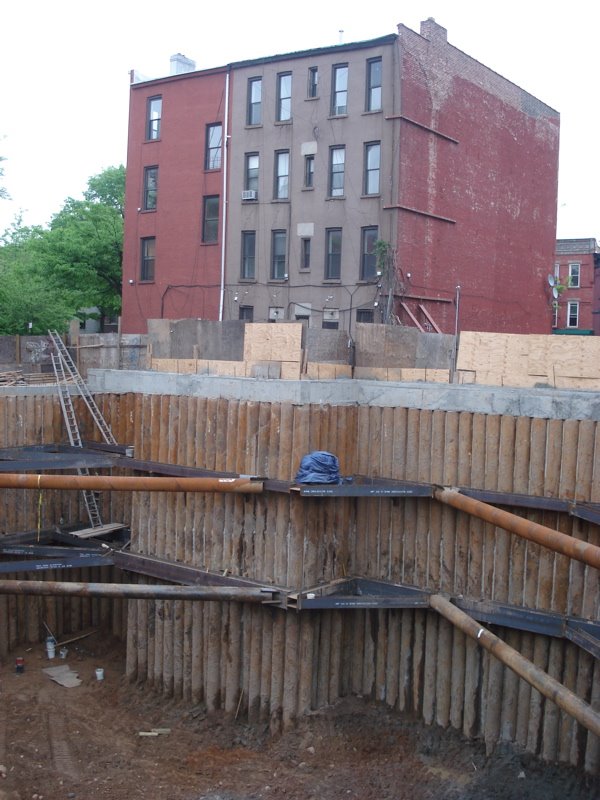 July  26th will mark the  five year anniversary of 1504 8th Avenue's  crack induced Vacate Order.  If you recall back on that day in 2006,  eight families were forced out of their apartments and onto the street after the Brooklyn Buildings Department determined that the huge masonry cracks spotted running up the front, side and rear facades of their building had become  imminently perilous to their life.
The DOB issued Vacate Order is currently still in effect while the building's owner, Arnold Rosenshein, seeks financial restitution  in Kings County Supreme Court before Justice Laura Jacobson.

According to a multi-million dollar civil lawsuit the owner, Arnold Rosenshein, and his engineer Sheldon Pulaski, P.E. allege the damage to his building occurred during the  bungled excavation and construction of the adjacent Armory Plaza Apartments at 406 15th Street.  According to engineering reports, improper drilling and caisson installation techniques were used by the developer/builder during the excavation of the Armory Plazas' 60' deep, three-leveled underground parking garage which extends right up to the shared rear property line. 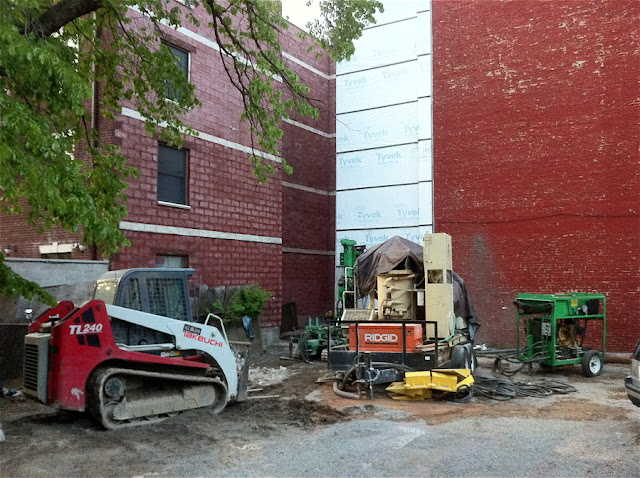 This  month remedial work began on stabilizing the disturbed soil and repairing what's left of the severely cracked rear and side foundation walls.  Atlantic Drilling rig and  highly pressurized grout injection equipment are on site.