Ker-falafel: The Olive has Fallen From the Vine. 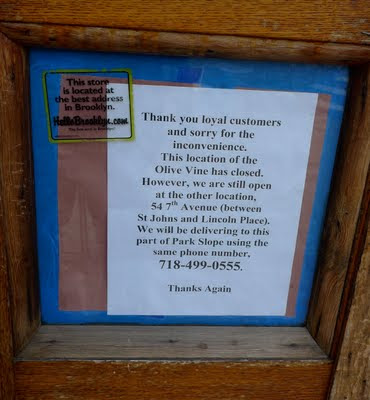 Looks like the Olive Vine Cafe's 15th Street location has closed amongst allegations their employees were not being paid the minimum wage of $7.25 a hour. However, before you swear off the Zaater Bread, you should know the owner of the OV Cafe is currently "negotiating a resolution" in order to pay back those lost wages.
According to this sign on the door, they are still planning on making deliveries to this end of the Slope. Just make sure you tip those delivery men well, preferably in cash. 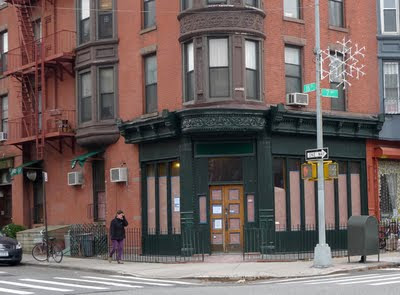 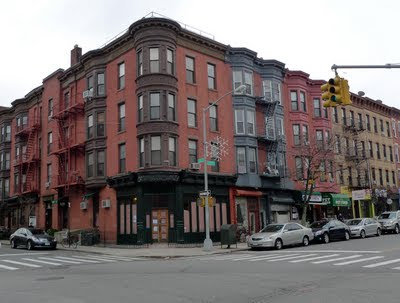 NY 1 is reporting The State Labor Department released a report that says 25 Brooklyn restaurants and cafes owe at least $910,000 in unpaid wages to more than 200 workers.

State inspections of Park Slope restaurants during the spring found that some workers made as little as $2.75 an hour, which is far below the state minimum wage of $7.25.

Most of the involved workers were immigrants. 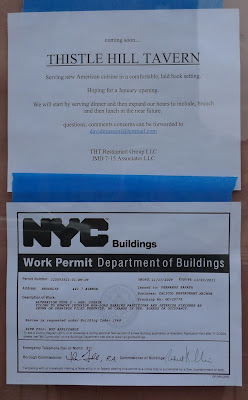 On an upbeat note... South Slopers may only have to wait till this January for the opening of David Massoni and partners' newest creation,
Thistle Hill Tavern.

The new owners are already busy gutting the old Olive Vine space, removing most of that unappetizing, overly polyurethaned wood paneling that seemed to cover every square inch.


For those Olive Vine regulars...

Posted by IMBY at 10:53 AM No comments: Links to this post

On December 2, 2009, contractors must follow new requirements for notifying the Buildings Department before starting full and partial demolition work. These requirements are outlined in Chapter 33 section BC 3306.3 of the 2008 Construction Code. (Click here for PDF)

The Department has changed the notification requirements for full demolition work. To notify, contractors must call (212) 227-4416 within 24 to 48 hours prior to starting work. The BEST Squad will no longer accept notifications. Callers will be given a confirmation number upon notification.

• Notification to the Department: To notify, contractors must call (212) 227-4416 within 24 to 48 hours before starting work. Callers will be given a confirmation number upon notification.

• Notification to adjoining owners: If partial demolition work will involve non hand-held mechanical demolition equipment, contractors must notify adjoining property owners. Contractors must also provide proof of notification to the Department by submitting a copy of the notification letter sent to the adjoining property owner along with a certified mail receipt from the mail carrier. The letter and receipt must be submitted when requesting a construction permit.


If full or partial demolition work will not begin as scheduled, contractors must notify the Department by calling (212) 227-4416 and providing the confirmation number that was originally created for the initial notification. Notification of cancellation must be made no later than the day work was scheduled to begin. 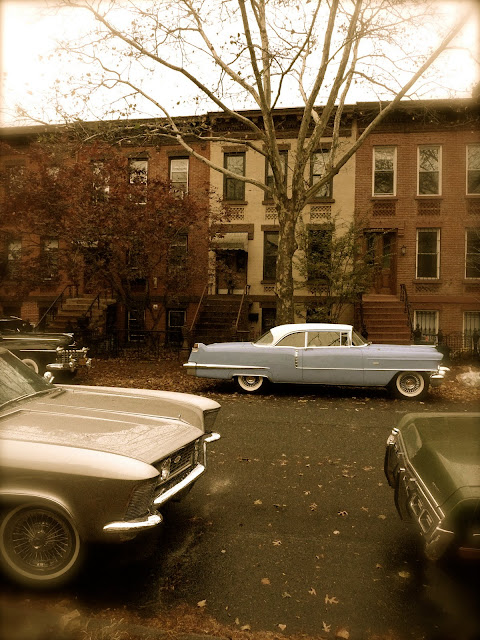 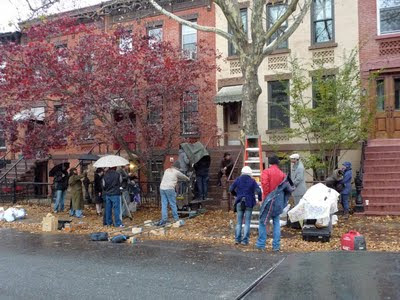 "The man who loved flowers" filming on 16th Street circa 1963 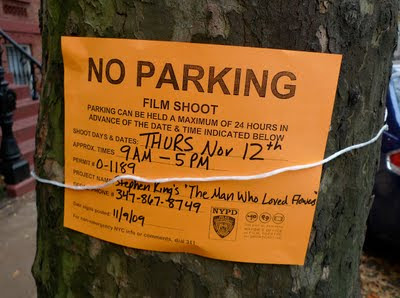 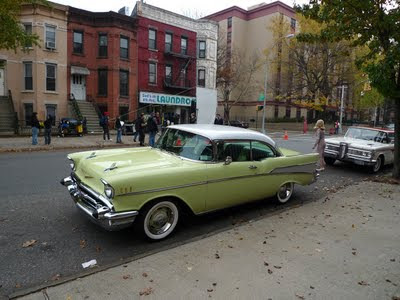 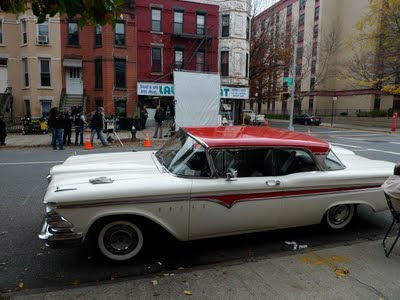 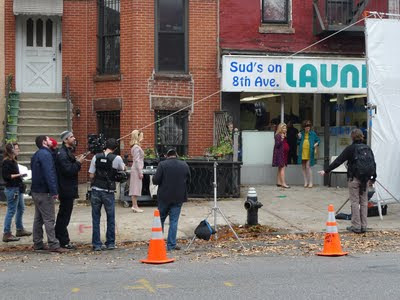 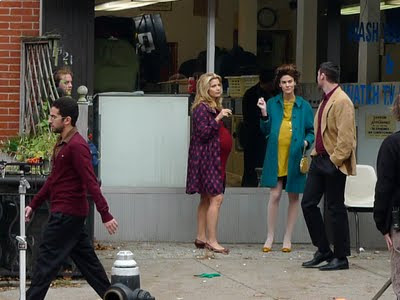 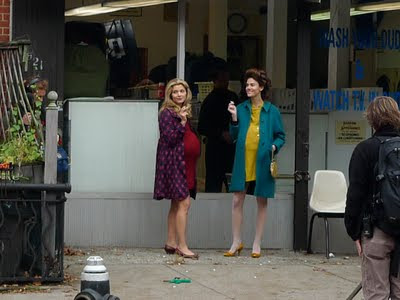 It's an adaptation of the 1977 Stephen King short story "The man who loved flowers" being directed by Juan Pablo Reinoso and producer Wayfinder Films.

Shooting continues Wednesday on and around Bartel- Pritchard Circle and Prospect Park.
Posted by IMBY at 2:07 PM No comments: Links to this post 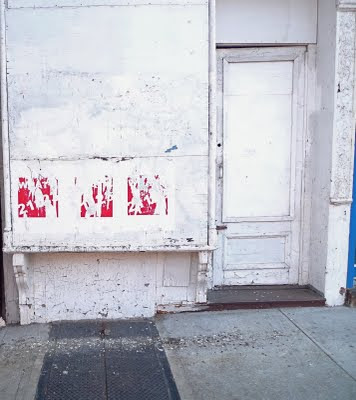 Mad men? Where to send the cleaning bill.
http://www.21123condo.com/email.asp?propertyid=1
Posted by IMBY at 1:20 PM 1 comment: Links to this post


My sugar stoop.
Where I come from there's a place called heaven


Blood races to your private spots
let's me know there's a fire.
You can't fight passion when passion is hot

Temperatures rise inside my sugar stoop.

Let me take you somewhere you've never been

I could show you things you've never seen.
I could make you never wanna fall in love again

I feel so alive when I'm with you!
Come and feel my presence
it's reigning tonight.
Heaven on earth upside my sugar stoop.
Let me take you somewhere you've never been
. . . 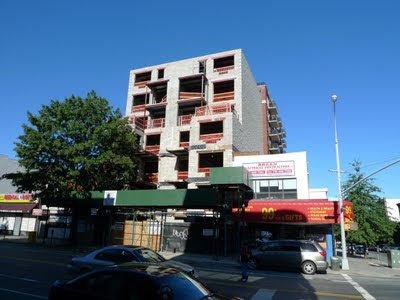 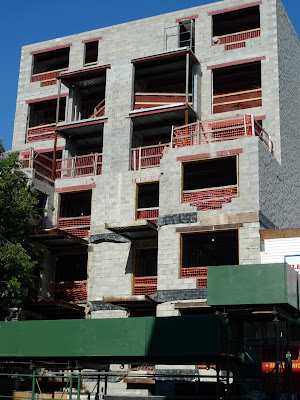 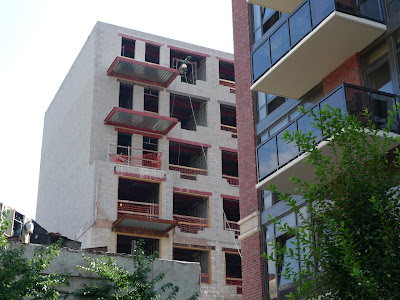 ACCORDING TO MONTHLY DEPARTMENT OF BUILDINGS ACCIDENT REPORTS:
ON JUNE 6TH, 2009 the B.E.S.T. Squad reported

"A WORKER SUPPORTED BY A GUARDRAIL FELL APPROXIMATELY 4 STORIES INTO A SHAFT WHEN THE GUARDRAIL GAVE WAY, 8 ECB VIOLATIONS AND A STOP WORK ORDER WERE ISSUED"


ECB Violation Number: 34790528Z
Specific Violation Condition(s) and Remedy:
"FAILURE TO SAFEGUARD ALL PERSONS AND PROPERTY AFFECTED BY CONSTRUCTION OPERATIONS, RESPONDED TO 1 ACCIDENT AT ABOVE ACTIVE SITE AS REPORTED BY FOREMAN, IRON WORKER WAS LEANING OR POSSIBLY SITTING ON THE..."

More than 30 construction workers died in falls and other events on job sites in New York City last year, the federal Department of Labor reported Wednesday. Chiefly because of that spike, the overall number of workers who died on the job in New York in 2008 was 90.

The toll of on-the-job fatalities, which had been on a downward trend for the past decade, was up 11 percent from 81 in 2007, according to the report, from the Bureau of Labor Statistics. Among the various ways New Yorkers were killed at work, the biggest increase was in falls, which claimed 29 people, up from 23 in 2007. All told, there were 31 fatalities related to construction, up from 24 in 2007.

Murders in the workplace also rose, to 18 from 15 in 2007, the report showed. But the killers used guns less often: the number of workers shot to death declined to 10 from 12.

“Construction clearly remains a dangerous activity,” said Martin Kohli, an economist for the bureau. “It clearly remains the area in the city where we continue to have the most fatalities.”

The national trend was quite different. On-the-job fatalities dropped by more than 10 percent, and the number of fatal falls was down by more than 20 percent, according to the report.

Mr. Kohli said he would not conclude from the figures that construction was less safe in New York than in the rest of the country. Instead, he attributed the divergence to the timing of the slump in building.

“New York City was still having a construction boom in 2008, and you started to see a bust nationally earlier than that,” he said.