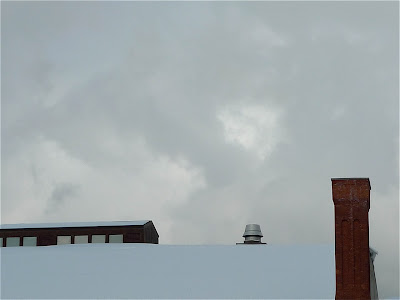 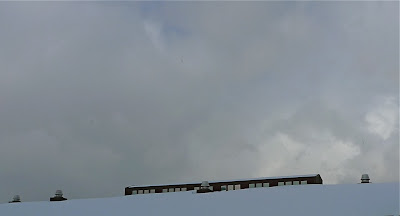 Snow Capped Brooklyn Longhouse
Posted by IMBY at 10:24 PM No comments: Links to this post 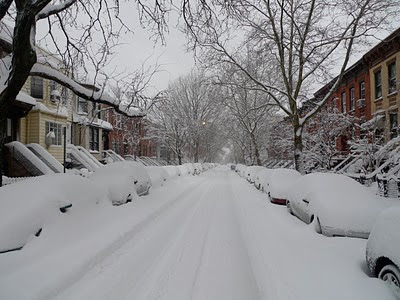 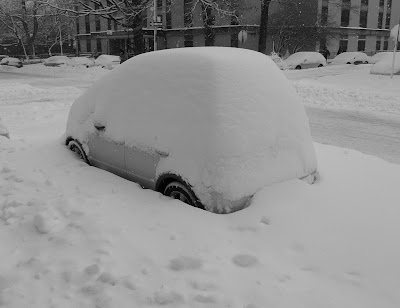 Hybrid Igloo
Posted by IMBY at 10:16 PM No comments: Links to this post 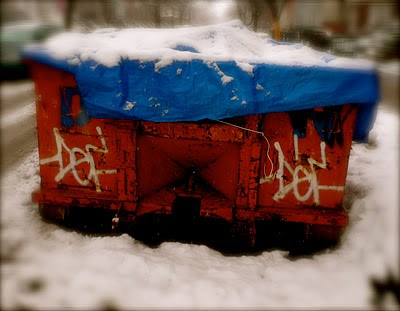 10 YARDS
BROOKLYN
NEW YORK
Posted by IMBY at 8:44 PM No comments: Links to this post 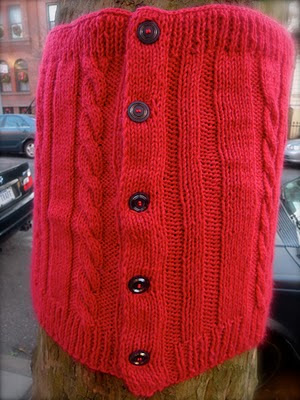 Update: Sweater has been returned!
Have you seen this sweater?

There was no ransom note left at the scene. I'm going to jump to conclusions and blame an invasive species. Come to think about it, I did see a suspicious looking ginkgo hanging around the block.
TIPSTER SWEATER HOTLINE 718 768 1378 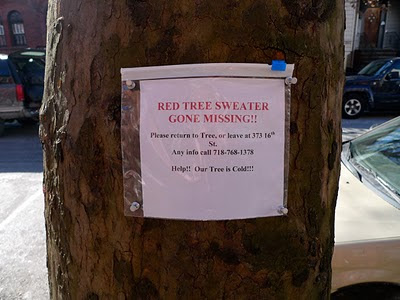 additional sweater photos HERE
Posted by IMBY at 10:10 AM No comments: Links to this post 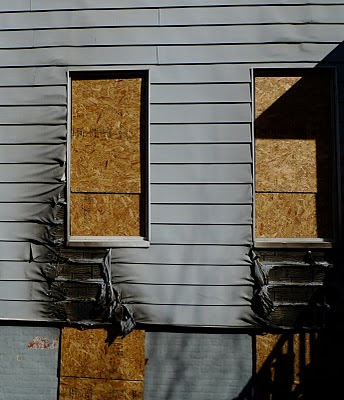 Posted by IMBY at 10:01 AM No comments: Links to this post 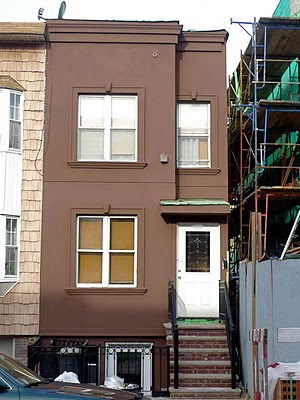 Fascia Transplant
There is an elegant futility in the way this homeowner has decided to upgrade his little South Slope frame house. It's been resurfaced with a kind of imitation brownstone or Exterior Insulation Finish System (EIFS), commonly known by its detractors as plastic stucco. This supposedly water tight plastic barrier system has been plagued by moisture infiltration problems that can result in mold growth and structural decay. The industry itself seems to blame the failure on a multitude of sins mostly having to do with the installation contractor failing to follow the manufacturers guidelines and specifications.
EIFS LINK
Of coarse true Portland Brownstone is not without it's own inherent structural problems as many Park Slope Brooklyn home owners can testify to.
It seems that 100+ years ago, ignorant builders, in their haste, often used quarried stone that had a high water content and was not properly cured or dried out before being applied to the face of a building. Often the sandy stone was cut in such a way that exposed its thin sedimentary layers to the weather and its destructive freeze/thaw cycles, causing it to literally crumble apart. Brownstone buildings sometimes experienced this characteristic flaking, known as spalling, as soon as 10 to 20 years after construction. Unfortunately, resurfacing today's damaged Brownstone facades with a mixture of cement and brown colored masonry pigments can cost tens of thousands of dollars.
We will see what the future holds for these "EIFS Brownstones". My guess is that in the near future, there will be a great demand for contractors specializing in plastic stucco surgery. 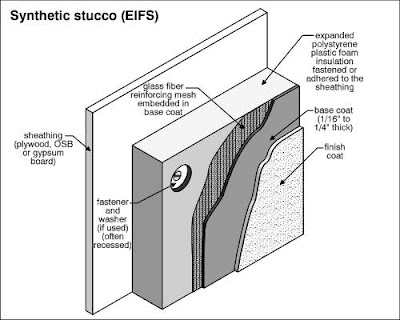 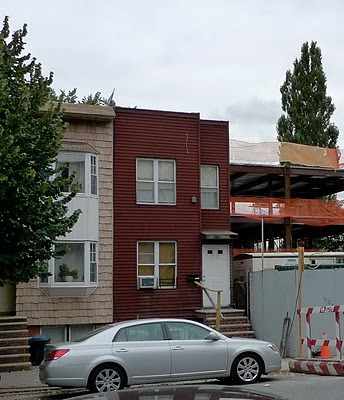 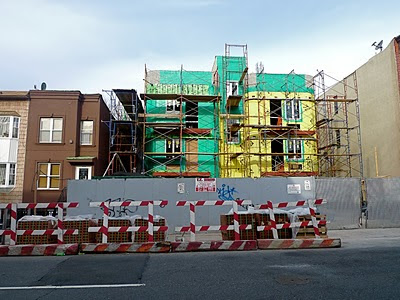 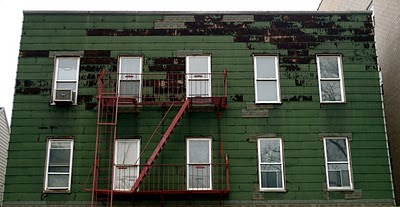 23rd Street Before and After 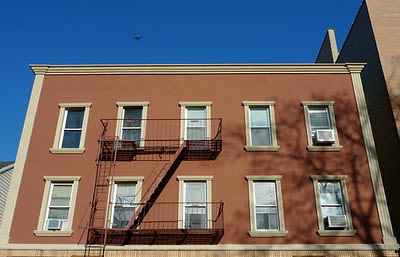 Posted by IMBY at 10:05 AM No comments: Links to this post

2010 State of the Borough: Apparently no one walks to the gym. 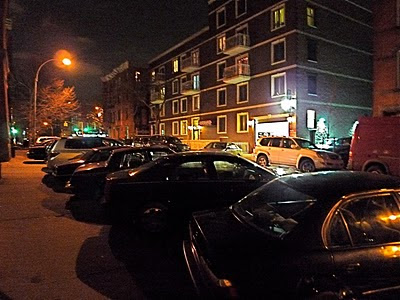 Last night Brooklyn's third term President Marty Markowitz gave his annual State of the Borough Address christening the new YMCA Park Slope Armory Sports Facility.In his speech Markowitz announced that he will provide $1 million in capital funds to help transform the Bedford-Atlantic Armory in northern Crown Heights into a vibrant community center and another $1 million to redevelop the Sumner Avenue Armory in Bedford-Stuyvesant.

"PUBLIC TRANSPORTATION IS THE LIFEBLOOD OF EMPLOYMENT FOR MOST BROOKLYNITES."

Dozens of No Parking signs were posted yesterday for both the entire block of 14th Street, 15th Street, and a section of 8th Avenue, apparently to make room for the cars of those who attended the evening's affair. I have to ask, how does turning an entire block into a private parking lot, encourage the use of mass transit and physical fitness? The Armory is actually less than two blocks from the F Train. Why would anyone need to drive their own private car to a political celebration held in a sports facility whose crowning jewel is a multimillion dollar state of the art running track?
What could be less pedestrian friendly than allowing parking on the sidewalk. 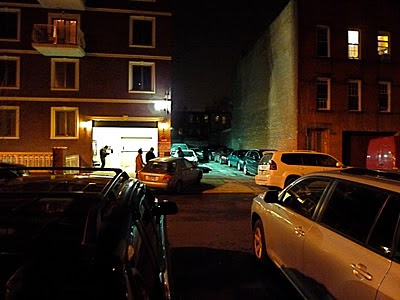 The Other Armory.
Glad to see our friends at the Armory Heights Plaza, 406 15th Street, took advantage of this special event, charging automobile commuters by the hour to park in their black-tie, valet operated facilities.
Only problem is that the city has found this use in violation of both NYC zoning regulations and the building's Certificate of Occupancy.
Personally I don't give a flying rat's ass if it wasn't for the fact that the Brooklyn Department of Buildings assured the 16th St. neighbors who happen to live along side the 2 story underground parking lot's only carbon monoxide vent, that the exhaust would never rise to dangerous levels. That is as long as it was used as intended... for noncommercial off-street parking for the building's residents. 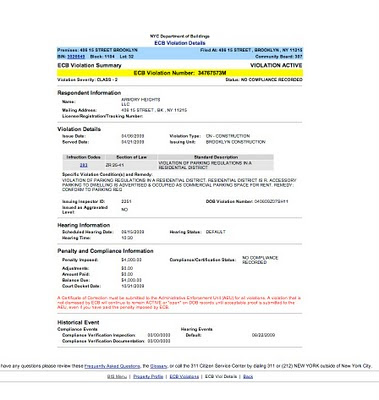 Posted by IMBY at 10:00 PM No comments: Links to this post