Shroom of the Week

Definitely not in the South Slope. 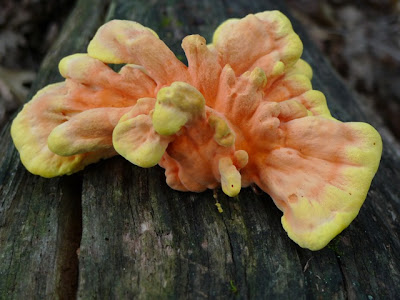 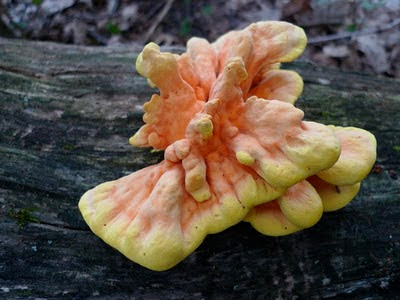 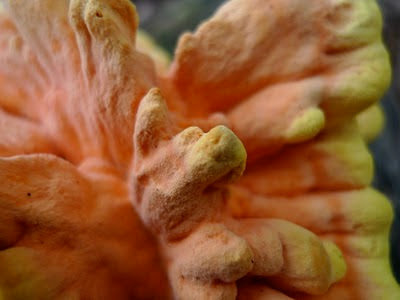 (Laetiporus sulphureus) Commonly known as the "Chicken of the Woods".
Posted by IMBY at 10:39 PM No comments: Links to this post

446 and 448 7th Avenue before and after shots of wooden cornice restoration.

If my memory serves me right, they tweeked the original design by adding two additional brackets.  The original (7 corbel brackets instead of nine), would have been similar to what you still see next door on the "Tumor Building". 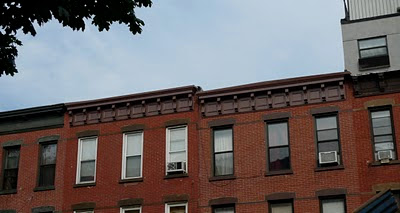 Buildings at Work is a new series that provides an inside look at the New York City Department of Buildings, where specialized teams of architects, engineers, inspectors and administrators are dedicated to ensuring the safe and lawful use of more than 975,000 buildings and construction sites throughout the city.  Very nice photography, I might add.

Posted by IMBY at 9:29 AM No comments: Links to this post

The Mushrooms of Millerton 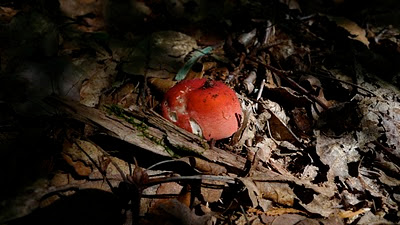 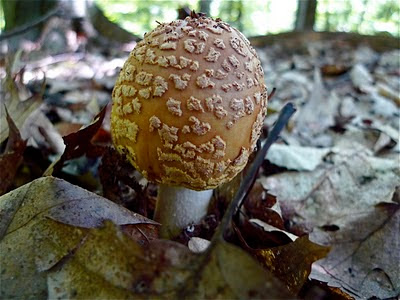 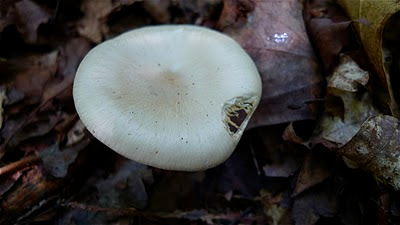 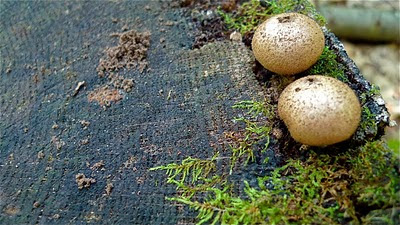 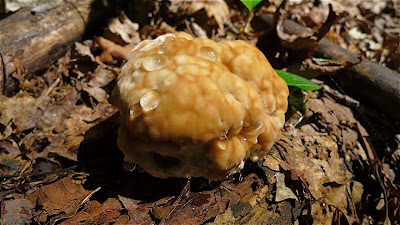 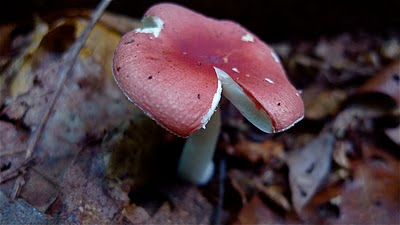 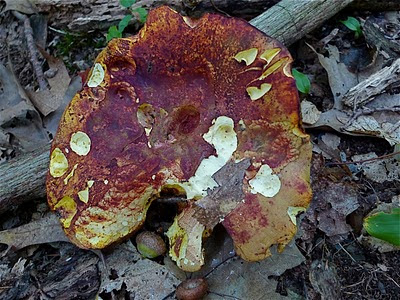 The fungus among us.

Traipsing through the hardwoods.

Overhead a mottled canopy.
Abundant layers of fusty detritus underfoot.
Taste?
Posted by IMBY at 5:31 PM No comments: Links to this post

The HomeWorks Home Ownership Program.
Sounded like a great opportunity...

That is when it works.   New York City conveys its blighted stock of  vacant, one to four family homes, free and clear of all encumbrances, to prescreened qualified developers for the sum of just $1 with the understanding that these properties will be completely rehabilitated and  sold at market prices.

Lucky home buyers, chosen by lottery, who would other wise  never be able to afford a home of their own, now have that opportunity.  (Buyers receive help in the form of low down payments, partial tax abatement, and eventually rental income.)
Urban Renewal
So, The City get's out of the landlord business, developers make a little profit, builders are working, homes are created for families, and neighborhoods no longer have abandoned eyesores to deal with.  A win/win scenario, you would think, for all parties...  Except, six years have passed since the developer, Just Homes, LLC  took possession of these three properties and there's still nothing  to show but faded graffiti covered banners stapled to weathered plywood fences.  The only movement to be seen... Shredded house wrap waving in the wind like the white flag of surrender.


So what went wrong?  Contractor vs. Developer dispute leads to loss of financing.

New York Supreme Court documents indicate that the owner/developer, Just Homes, LLC is currently being sued for breach of a construction contract entered into with their chosen builder, Mike Building & Contracting, Inc.


Just Homes, LLC was formed  in February, 2002 for the purpose of developing affordable housing in New York City.

In September, 2000,  Just Homes applied to the New York City Department of Housing Preservation and Development (HPD) to be designated a developer under the HomeWorks Homeownership
Program - a program through which HPD sells vacant city-
owned buildings to developers at nominal cost for rehabilitation into multi-family dwellings.
The construction projects are funded by loans from the Community Preservation
Corporation (the CPC), a private not-for-profit lending institution.

On July 12, 2005, Mike Building & Contracting, Inc. entered into a contract with Just Homes for the improvement of all three Brooklyn properties for the sum of $1,350,965.

On August 25, 2005, Just Homes closed on the purchase of the Properties from HPD, paying
$1 for each.
On that same date, Just Homes closed on a building loan from the CPC in the sum of $1,225,000.  Under the Building Loan Agreement with CPC,  Just Homes was obligated to provide $193,415 in borrower’s or owner’s equity from its own funds towards the project’s construction contract price of $1,350,965.
(CPC required borrowers to have a minimum of 20 percent equity in the project before it underwrote the Building Loan.)

Work commenced on the project in October, 2006, and, on or about October 23, 2006, Mike Building & Contracting submitted its first payment requisition to Just Homes. The Building Loan Agreement required the CPC’s engineer, Ira Streitfeld, to approve each payment requisition, following inspection of the site, to ensure that the actual quantity of work on the three properties was consistent with that claimed by the general contractor, as certified by the architect Robert C. Gaskin, A.I.A. of the firm RCGA.

There will be two more scheduled payment requisitions before trouble ensues.

March 2007 Just Homes, LLC representatives bring all concerned parties to the table to discuss what they consider to be “huge discrepancies” between the amount requested in the contractor's three payment requisitions and the amount approved by the CPC engineer, the quality of the contractor's work, and the substantial project delays.

Apparently the mortgage loan holder's engineer had only approved approximately $26,000 of the approximately $335,000 requested by the contractor and certified by the project's architect, Robert Gaskin.     Just Homes came to believe there was a “serious problem” with both their builder and architect on the project.

The final nail in the coffers.
The Community Preservation Corporation thereafter terminated their loan with Just Homes, LLC in 2007 when they were unable to remove the lien.  End of story?

The thing that I find so disheartening is that hand-holding was promised from the start of the relationship.    From the CPC web site:


"To CPC, no loan is simply a financial transaction. Each project reflects CPC's commitment to help developers succeed at strengthening communities. CPC serves as a borrower's ally and "one-stop shop," guiding the project from deal inception to project completion. Throughout the challenging process of developing or rehabbing a property, CPC provides useful technical assistance at every step."


Time to Revest?
HPD has the power to take back the properties if for instance the developer fails to complete the project within the agreed upon date.


Article IV    "Abandonment or substantial suspension of construction after the comencement date and before the completion date," is reason for default.

Revesting.  "If any Uncured Default shall occur prior to the issuance of a Certificate of Completion for the entire project pursuant to section 201.B, the City may, subject to the laws of the State of New York, re-enter and take posseession of the Disposition Area and terminate and revest in the city the estate conveyed to the sponsor, in which event all right, title, and interest of the Sponsor in and to the Dispositon Area shall revert back to the City."  And so on, and so forth, ect, ect ect.

There has to be some nonprofit out there willing to tackle these three sites?  Anyone?  Anybody?

“To begin, let’s talk about the housing environment we now find ourselves in. Even in the best of financial times, creating and preserving affordable housing in New York City is a challenge. And these are, as we all know too well, far from the best of times. The collapse of the housing market – the dramatic trigger for the worldwide financial meltdown of 2008 – has, thankfully, not been as disastrous here as in many other parts of the U.S. But it’s certainly been bad enough. The private market financing so many of your organizations rely on to fund low-income housing development has dried up. Despite signs of hope in the economy, here and nationally, foreclosure activity, particularly in Southeast Queens, Central Brooklyn, and other communities, is on the rise. Many apartment buildings bought at steeply inflated, speculative prices are now in financial distress and at risk of landlord neglect – jeopardizing the well-being of tens of thousands of tenants. And unemployment, depleted savings, and rising debts have combined in a perfect storm, threatening many New Yorkers who’ve worked hard to be part of the great American dream of homeownership with the loss of their homes.

“Those are grim realities – and we have to face them squarely and address them boldly. But we also have to recognize that they don’t compose the entire picture. Not by a long shot. The housing ‘glass’ in our city isn’t empty – or even half-empty. Because the reality is that our Administration’s affordable housing plan – the New Housing Marketplace Plan – continues to profoundly transform New York’s housing environment – for the better.

Posted by IMBY at 10:01 AM No comments: Links to this post


Fencing needs to be installed...The surrounding pathways completed... Maybe some additional plantings... Otherwise it looks good to go.
Posted by IMBY at 8:17 AM 1 comment: Links to this post