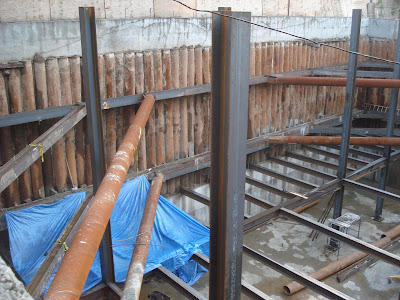 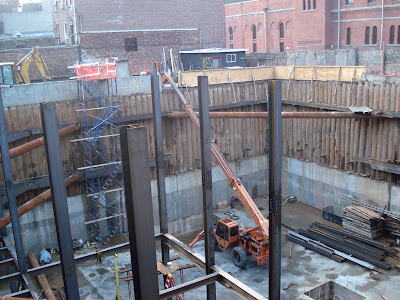 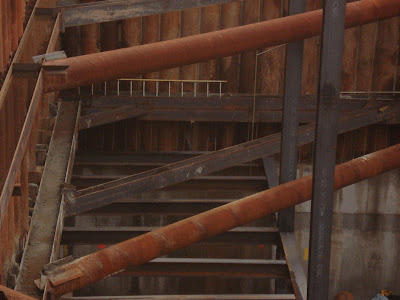 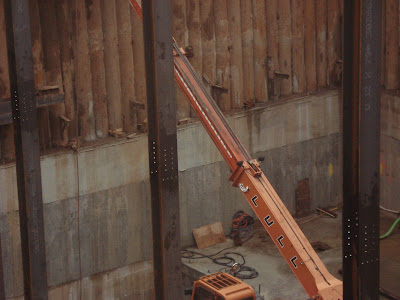 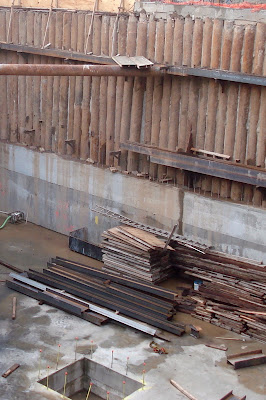 Posted by IMBY at 10:53 PM No comments: Links to this post 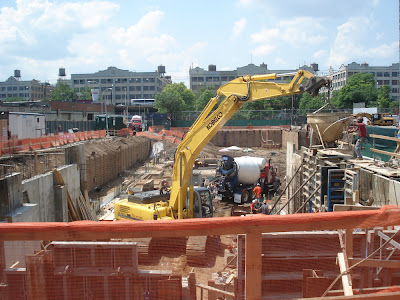 When driving by you might mistake this construction site for just one more of the many generic luxury condominium developments being built up along the Fourth Avenue in Brooklyn these days. That is until you see the sign posted on the sidewalk shed that proudly proclaims yes, we're "Building better schools for the children of New York".

When a friend told me that they, The Department of Education and The New York School Construction Authority, had already started construction on the new Sunset Park High School I had to see it for myself. It's true. There is a big hole in the ground on Fourth Avenue between 34th and 35th Street. There are indeed workers building forms and pouring concrete. They have a nice big blue block-long plywood fence stretching nearly to Third Avenue and there is that colorful, eye catching sign, with a rendering of what the building will look like when it's finished. 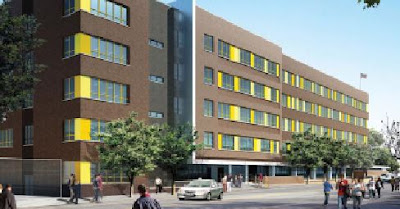 The Architect is Hillier Architecture. The general contractor is The Leon D. DeMatteis Construction Corporation. (By the way Mr. DeMatteis, they spelled your name wrong on that DOE sign out front.)

So what's in store for the kids:
The facility is being built on an approximately 48,000 square foot site (Block 688, Lots 26 & 44) on Fourth Avenue between 34th and 35th Streets. The site adjoins the 1.13-acre John D’Emic Sr. Memorial Park, just off Third Avenue which is a City-owned playground operated by the New York City Department of Parks & Recreation. The school will contain approximately 191,000 gross square feet within a fully air-conditioned, five-story (plus cellar) structure. The new facility will contain general education classrooms; science demonstration rooms and laboratories; art and music rooms; a 550 seat auditorium; a 4000 square foot wireless technology library; a full competition gymnasium; a cafeteria and kitchen; and also a separate space for administrative and support offices. The proposed building would cover most of the site, and would maintain entrances off 34th St., 35th St., and 4th Avenue. SCA would petition the New York City Department of Transportation to reverse the traffic directions of 34th and 35th Streets in order to facilitate the safe drop-off and pick-up of students.

The Sun Never Sets on The Slope.
I don't really know that much about Sunset Park. It has beautiful sunsets. We Sixteenth Street residents share the same police precinct, the 72nd, and the same community board, good old no. 7. I know for a fact that Park Slope Brooklyn, being the center of the Known Universe, forever unfolding and expanding, has been gradually "pulling chunks off" the northern edge of Sunset Park for decades. So great is The Slope's gentrificational gravity field that entirely new neighborhoods have been created when any surrounding land mass even passes within Its reach. South South Slope/ Green Wood Heights/G Slope are considered by some to be the unholy bastard offspring of just such a collision. So with this continental drift theory in mind who is to say whether or not 34th and Fourth isn't already part of My Backyard Neighborhood. 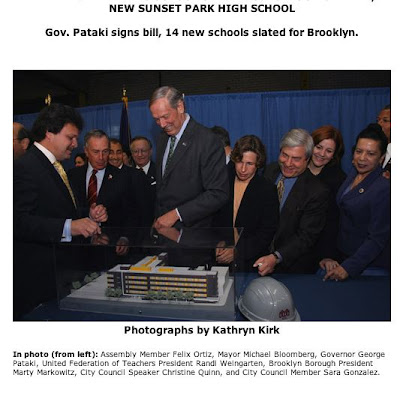 God is in the details, and He giveth and taketh away, too!
When you think about it your stomach hurts. It truly is amazing how hard it is to get public works projects completed in New York City. Three decades in the making, Sunset Park finally gets its own neighborhood facility, all 1640 seats worth, approximately. What's behind this success story? This being Brooklyn, plenty. Bureaucracy? Yes! Corruption? You bet! Greed? Darn tootin! Official malfeasance? Of coarse! Sexual misconduct? Let's hope! So for those interested in the real story behind the story IMBY, like Fresh Direct, now offers you all the basic ingredients to concoct a story according to your own individual taste buds at the convenient click of ones mouse.

Would you care to know more about Organized Crime and its involvement in the building of Sunset Park's PS24? TASTE THIS or I SAID TASTE THIS.

Want to know more about the troubled history of the School Construction Authority?
SMELL THIS FIRST or THAT'S NOT WHAT I THOUGHT IT SMELLED LIKE.

Appetite for Local Flavors, You Say?


Just thinking about thinking of living in Sunset Park?
ORDER NOW or AS SEEN ON TV!

How about the history of the Gowanus Expressway?
LICK THIS or THIS IS GOOD ALSO.

Don't forget desert! What happened to the sex trade when it left Times Square? Did you check under the Gowanus? PEEP HERE or POKE and STIR HERE


Posted by IMBY at 3:27 PM No comments: Links to this post 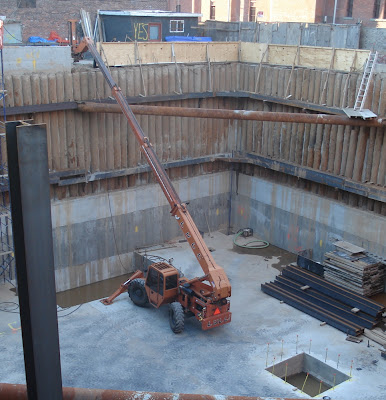 Now that the base slab is complete, hopefully the tangent piles will be secure. Finishing this aspect of the foundation's design without additional delays was a major concern of the Department of Buildings. They were worried that the site was vulnerable in it's bottomless condition, having lifted the stop work order and allowing additional weekend work for this reason.
The building's basement design calls for the fabrication of an extensive grid of steel I-beam boxes. How these many supports will work inside a parking garage remains to be seen. The more obstacles in the way the less usable space for parking cars. I suspect that they will work double duty keeping the bathtub's exterior walls in place over time as well as holding up two cellar floors of the parking garage and 5 more stories of building above ground. 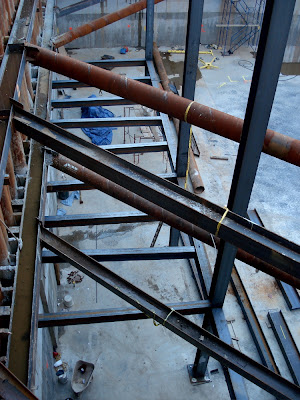 The brown rusty pipes running on diagonals through the grid are temporary bracing that will eventually be removed. 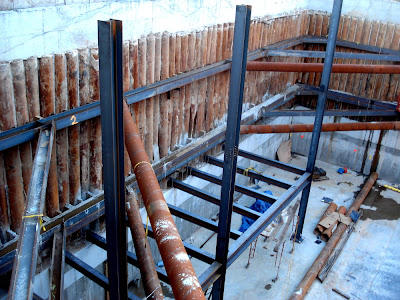 Posted by IMBY at 8:10 AM No comments: Links to this post