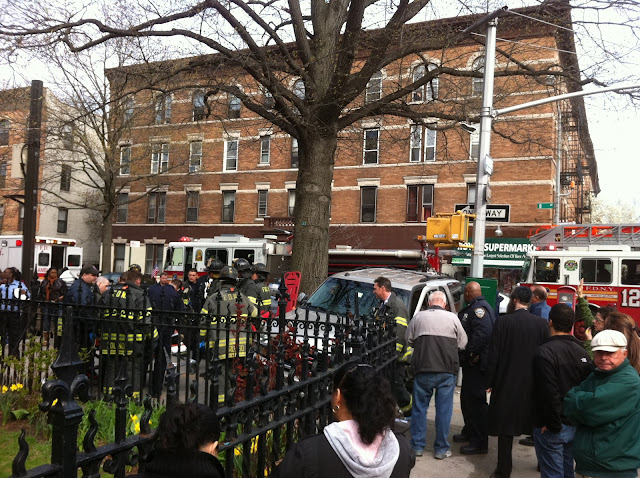 Shortly after 4pm, the driver of this silver SUV apparently lost control and jumped the curb at the intersection of 8th Avenue and 15th Street, stopping just short of the iron fence out front of the Park Slope Armory Sports Facility. The vehicle finally came to a stop after it  wedged between the base of the utility pole and a large tree.  The impact tore the  front left side wheel completely off. Witnesses are saying that as many as 4 people waiting on the sidewalk were struck.
I saw two women, one with her legs bandaged in wooden splints, being loaded into waiting ambulances.

The driver (wearing white and gray striped shirt and jeans standing next to the police officer) did not appear to be hurt.

This intersection, site of frequent accidents, is particularly dangerous as many drivers race down from Bartel-Pritchard Square on 15th Street  trying to beat the stop light only to be hit by rush-hour traffic speeding down 8th Avenue exiting off the Prospect Expressway.   Just a few months ago, a new stop light was installed four blocks up 8th Avenue at 17th Street near PS10.
Posted by IMBY at 4:01 PM No comments: Links to this post