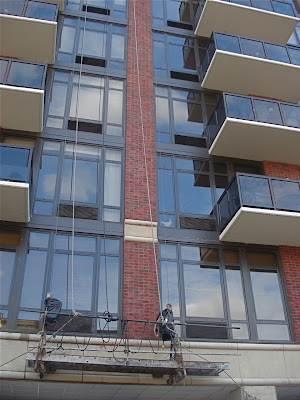 New construction problems for 162 16th Street a.k.a. "The Vue".
Can't imagine someone making this 311 Building's Department related complaint unless they actually lived in the building. Could they be renters? Can't imagine a condo owner feeling it was necessary to involve an outside government agency in their unit's problems unless they were having trouble reaching some kind of settlement with the builder/sponsor. Then you know someone had to let the DOB inspector into their apartments in order to find enough damage to write this violation.

observer.com
The Local: "Condo Buyers Beg Off"
More buyers, developers litigating their ways out of contracts by Lysandra Ohrstrom

"In the very loose credit market that has now ended, it might have seemed like sponsor-controlled co-ops weren’t really such a bad thing — after all, if the building is comfortable to live in, who cares that the sponsor is running a free market rental business with half the apartments, or controlling the building finances? Now that we are in an era of extremely tight credit, banks will have much more stringent policies about lending in co-ops, preferring to see over 50% of units owner-occupied.

When shareholders cannot sell or refinance their apartments, the sponsor is causing very direct harm to shareholders."

More information is available here.
Posted by IMBY at 5:43 PM

This is only the beginning.
Winter is coming and just wait till those fools start having to deal with the inevitable problems to follow.
Some one said it over 2 years ago -
"Buyer beware"
I heard from someone in the building that AFTER they moved in they started to read various blogs and other stories about the piece of crap they had just bought.
I felt sorry but told her the truth.
"Why the fuck did you wait till AFTER you moved in."

Those fools are sooooo screwed.
Can't say I feel bad for them.
It's not like the word wasn't out before they bought in.
They bought in blindly and now they are paying the price.
Worst part is they still don't want to admit that they are fools.
The first part of any recovery is to admit that you fucked up.
Bite the bullet and admit that you were an idiot.
Then go out and get even with those who contributed to the deceit - DOB and the Development Team (Katan, Katz and Radusky)