Roxy's "Erratic" in the Park 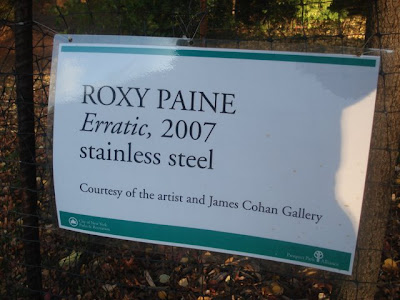 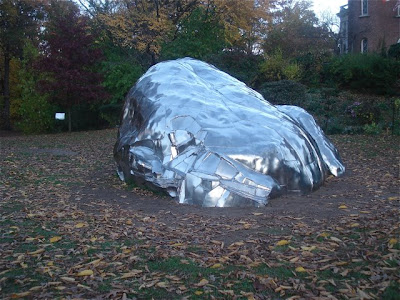 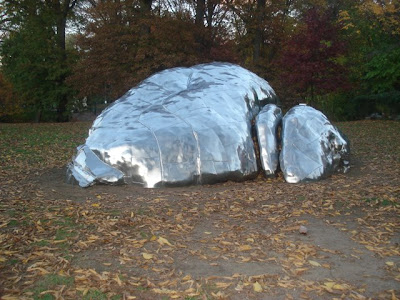 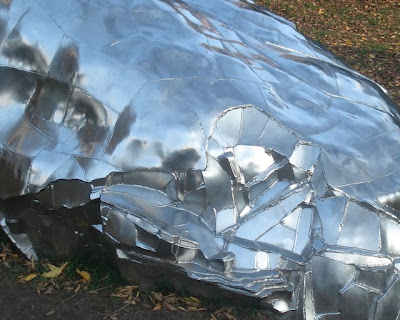 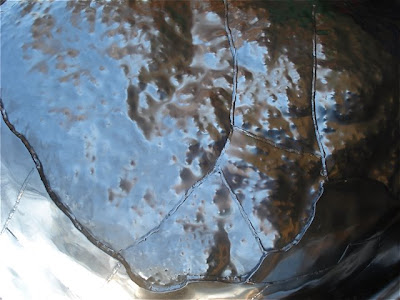 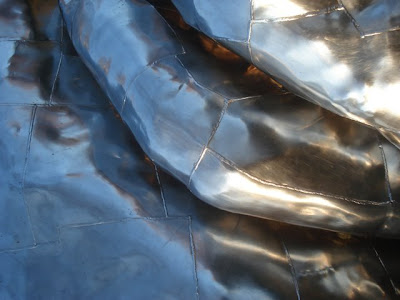 More Art in Prospect Park Courtesy of the Prospect Park Alliance and the James Cohan Gallery: Brooklyn Artist Roxy Paine's Erratic (2007) is now on view directly below the Litchfield Villa until March 2009.

Re-releasing his debris load.
You may have seen this sculptural work before along side the artist's other work- spectacularly constructed stainless steel trees- in Madison Square Park in 2007.
As for its title, geologically speaking, an "erratic" is a displaced rock that has been carried off by a glacier and deposited many miles away from its original geographic location. This particular boulder was most likely delivered by truck and not some Pleistocene ice flow. Of course Prospect Park is no stranger to real glacial erratics. The large boulders surrounding the Fallkill Pool were deposited there some 18,000 years ago when the Wisconsin Glacier de-iced.
Actually that's not totally true. It was Olmsted and Vaux, the designers of the Park, who went around and gathered up all those giant rocks in order to landscape, for example, our waterfall everyone is so convinced is naturally falling and not, in reality, just NYC drinking water pouring from a big pipe.

Terminally Morained
Paine's Erratic is pretty darn convincing. One has to imagine that the same amount of brute force that went into scouring the living schist out of Manhattan and leaving it piled up in this, the highest point of Brooklyn, must have also gone into shaping the hundreds of stainless steel plates that Mr. Paine used to construct the sculptural metal surface of his piece of the rock.
Heavy Metal
Take a look at the detailed photos. No one in their right mind is going to be fooled into believing this is the work of Mother Nature. That's not his intention me thinks. This is pure hard core Industrial Process. And besides, he's showing off.
Study the welded virtuosity of that multi-faceted puzzle pieced CAD assisted side.
Feel the mechanical brutality visible in that pneumatically pounded-out- from-within pimpled backside.
See the phenomenally reflective polished liquid mercury-like all over the rest side.
Something for everyone.

There is a Parks Department sign warning against climbing on the art work. It's not working...

Go see for yourself. Near Prospect Park West around 5th Street.
Posted by IMBY at 10:32 PM