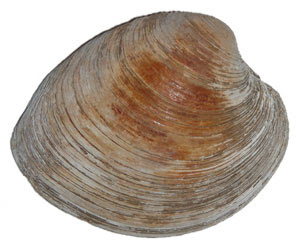 The name Quahog, also known as the Hard-shelled Clam or the Littleneck Clam comes from the Narragansett Indian name "poquauhock".

Wampum is the Indian name given to the beads crafted from the thick shells of the Quahog and was used like money in trade. Shell beads with purple spots are much more valuable than the solid white colored ones. 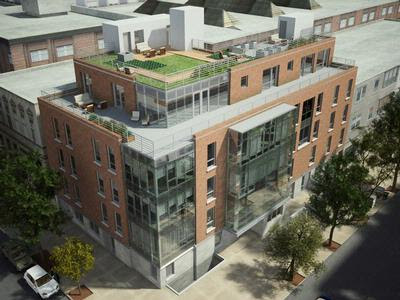 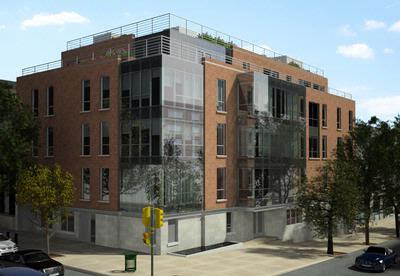 “People of the Longhouse"

When Long Island was first settled by the whites it was inhabited by 13 tribes or groups of Indians. The Canarsee, Rockaway, Merrick, Marsapeague, Secatogue, and Unkechaug lived on the South Shore. On the north were the Matinecock, Nesaquake, Setalcott, and Corchaug. On the east end of the Island were the Shinnecock, Manhasset and the Montauks.

Upstate New York is the traditional territory of the Haudenosaunee, also known as the Iroquois Confederacy. The confederacy is composed of the Mohawk, Oneida, Onondaga, Cayuga, Seneca, and Tuscarora Nations. Their traditional territory extended from the Schoharie Creek through the Mohawk Valley to the Genesee River. The Haudenosaunee believe that the Confederacy was formed “on the last day that the green corn was ready”, about 1,000 years ago. There is much scholarly debate regarding when the Iroquois Confederacy was established, but historians and archaeologists agree that it was in existence by 1630. The traditions of the Haudenosaunee state that the Confederacy was founded before Europeans first visited their country. 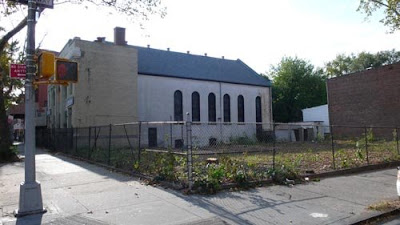 The Iroquois used a style of farming, known today as "slash-and-burn" that requires a community to move the location of its village from time to time. As the soils of the fields became exhausted, and firewood in the neighborhood became scarce, the people had to venture farther afield for these essentials of life. After awhile, the distances traveled for both became too inconvenient and difficult. For these reasons, and because the longhouses and palisades needed more and more repair, the community would decide to create a new village a few miles away.

An Iroquois village was made up of one or more longhouses, which were usually that: long houses. They ranged in length from about 60 feet to well over 220 feet, and were generally about 20 feet wide and 20 feet high. The framework of a longhouse resembled a large rigid basket made of wooden posts set into the ground, with other poles and saplings lashed to these to form the exterior walls and create the arched roof. 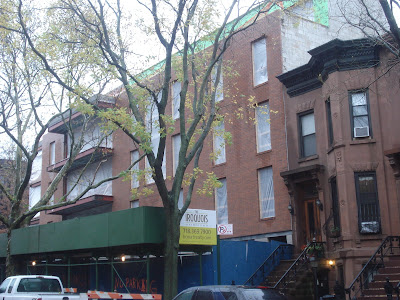 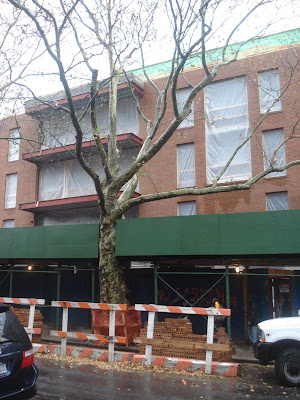 Bentancourt Realty has their new south Park Slope condo "The Iroquois" offering up on it's website.

"This is it. A rare new development in prime Park Slope featuring ten individually unique layouts. Exclusive and personal homes await you at The Iroquois, including townhouse-style units with separate entrances and private terraces. Light and airy simplexes, duplexes, and triplexes including two penthouses with incomparable city views, modern features and coveted privacy make your home as distinctive as your lifestyle."


Mortgage Calculator
The story goes that early in the 17th century, Peter Minuit of the Dutch West India Company "purchased" the island of Manhattan from the local Indian tribe, the Lenni Lenape, for 60 guilders in trade goods, or about 24 dollars worth of glass beads, mirrors and iron axe heads.
Even in our current "buyers market" the price of NYC real estate sure has gone up quite a bit since the 1620's, so I was wondering just how many glass beads it would take to "own" unit 4B.

4B asking price $1,825,000. Wow, that's $1,140 per square foot!
Holy Shinnecock, that's a lot of wampum even for Park Slope. I'm going to need a shit load of beads.
Current wholesale price of imported Czech assorted glass beads is .02¢ per gram.
Let's try to convert it into pounds per dollar, shall we.
If there are 454 grams in a pound... at .o2¢ per gram.. that's $9.08 per pound. Looks like I'm going to have to come up with 125.5 lbs of beads for every $1,140 square foot...Or in this case 200,800 lbs (a little over 100 short tons) of tiny glass beads if I want to live in a home as distinctive as my lifestyle. Maybe I should try iron axe handles from China. I can get those for $6 a piece, wholesale. I should have listened to my accountant and been eating more clam chowder over the years. I understand that genuine Quahog shell beads are going for more than $5 a bead.

Closing Documents
Peter Schaghen, the author of the document pictured below, was the representative of the States General in the Assembly of the Nineteen of the West India Company. In the late summer of 1626 he reported the arrival of the ship Wapen van Amsterdam, newly arrived from New Netherland.
In his report to the directors of the WIC he announced the purchase of Manhattan Island for the value of 60 guilders. The Schagen letter is the earliest reference to the purchase of the island which would become the center of New Netherland. The original of this document is held by the Rijksarchief in The Hague. 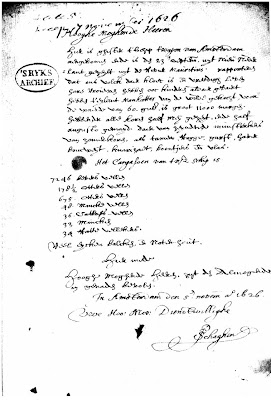 Yesterday the ship the Arms of Amsterdam
arrived here. It sailed from New Netherland out
of the River Mauritius on the 23d of September.
They report that our people are in good spirit
and live in peace. The women also have borne
some children there. They have purchased the
Island Manhattes from the Indians for the value
of 60 guilders. It is 11.000 morgens in size
[about 22.000 acres]. They had all their grain
sowed by the middle of May, and reaped by the
middle of August They sent samples of these
summer grains: wheat, rye, barleey, oats,
buckwheat, canary seed, beans and flax. The
cargo of the aforesaid ship is:
7264 Beaver skins
178 ½ Otter skins
675 Otter skins
48 Mink skins
36 Lynx skins
33 Minks
34 Weasel skins

Many oak timbers and nut wood. Herewith,
High and Mighty Lords, be commended to the
mercy of the Almighty,

Your High and Mightinesses' obedient