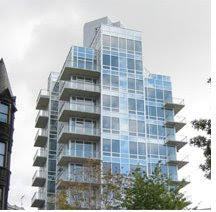 The 13-story tower at 525 Clinton Avenue is nearly finished. The developer, Karnusa Equities, is selling the condos for $650,000 to $3 million.
(Matthew Schuerman/WNYC)

Part 1: The Cost of Doing Business
by Cindy Rodriguez and Matthew Schuerman


NEW YORK, NY November 18, 2008 —Every day, construction workers pour concrete 400 feet in the air, cranes hover overhead and familiar views of the sky disappear. Since 2003, the city has been experiencing a historic building boom. Development hasn’t been this high for 30 years.

But that prosperity has come at a high cost. So far this year, 27 construction workers have died working on private and public jobs in New York City, even as the city and the federal government try to find new ways to improve safety.

In the “The Cost of Doing Business,” WNYC looks at one accident from earlier this year and analyzes why this new attention to construction safety came up short. Reporters Cindy Rodriguez and Matthew Schuerman found that the new regulations were not enforced or couldn't be enforced.

On January 30th, Jose Palacios, a Mexican immigrant, fell to his death when the scaffold underneath him collapsed. This is part one of how and why he died.

Part 2: The Cost of Doing Business
by Cindy Rodriguez and Matthew Schuerman

NEW YORK, NY November 19, 2008 —Construction safety has become all the more important over the past five years, as housing production reached numbers never seen since the city began keeping records in the 1960s. Yet so far this year, 27 construction workers have died on the job. Yesterday, WNYC began telling the story of one of those accidents.

Part 1 "The Cost of Doing Business"

Part 2 "The Cost of Doing Business"

Slideshow: "The Death of Jose Palacios"

Hertzberg Charged
Posted by IMBY at 10:50 AM