There's an entire file cabinet's worth of D.o.B. issued paperwork stuck to the construction fence out in front of 325 2oth Street in Greenwood Heights, Brooklyn. The Stop Work Order might have something to do with the large cracks running up the facade of the neighboring apartment building, 321 20th St.
Behind the construction fence almost all traces of the previous excavation work have been erased, the hole has been back-filled with dirt.
There is evidence of what appears to be single poured concrete pier with its rebar sticking out along side 321's now crumbling stone foundation. Underpinning of some aberration or another, I'm guessing? 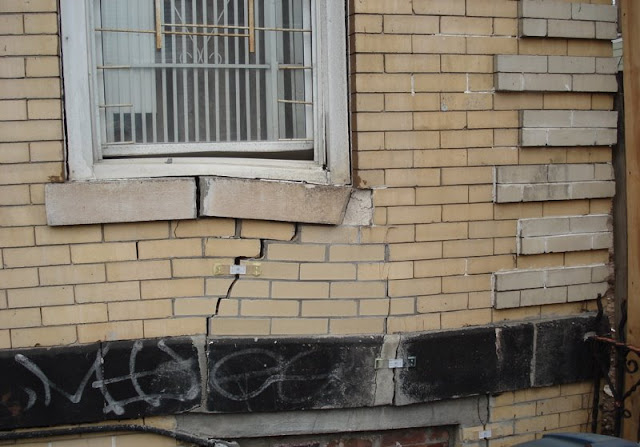 Another troubled low rise. Will Mosad pull the plug?
Our friends Henry Rudusky, R.A. and Louis Sanchez, P.E. should be given their proper credits.
Radusky and Bricolage Designs filed the building plans for 325, approved in June of 2007. Sanchez of Sanchez Associates, P.C. filed the shoring and underpinning plans also approved in June 2007. Mr. Sanchez is also affiliated with the firm Hertzberg and Sanchez. All three of these professionals are no strangers to controversial projects and have been disciplined by the Buildings Department in recent years.


"Louis Sanchez and Henry Radusky: Where have we heard these names before?"

"Proven Disciplinary Actions from the Department of Buildings."

The New York Times has one of my favorite stories about Hertzberg & Sanchez dating back to February 21st. 2000 that is a must read. Anyone interested in understanding why self certification was doomed from the start, should click on over to:

So when did the tears start to fall on this project? A rough time line indicates that on February 16th, 2008 a complaint was registered, #3253937, the caller stating that: "THE NEXT PROPERTY OVER HAS AN EMPTY LOT AND HAS DONE SOME DIGGING THAT HAS PUT HIS PROPERTY IN DANGER OF COLLAPSE AND HAS CAUSED SOME DAMAGE FOR THE PAST MONTH OR SO."
The D.o.B responded two days later by issuing TAO CONSTRUCTION INC a:
STOP WORK ORDER VIOLATION SERVED FOR NON-COMPLIANT AFTER HOURS WORK
Comments: DOB VIOLATION ISSUED FOR FAILURE TO CARRY PERMITTED WORK
DOB Violation #021708CNE01GA

Then one month later another complaint, #3257164 and another Stop Work Order on March 17th for: "ADJACENT BUILDINGS - NOT PROTECTED, FAILURE TO PROVIDE PROTECTION TO ADJ PROPERTY 321 20 ST. FOUNDATION WALL HAS CRACKS/BRICK FACADE HAS CRACKS"

This Full Stop Work Order was partially lifted so the contractor could make right what had gone wrong, to exclusively "COMPLETE SECTION ON UNDERPINNING ONLY."

Inspectors were not pleased with what they found.
"FULL STOP WORK ORDER SERVED"
Comments: "NO APPD PLANS FOR UNDERPINNING WITH DETAILS FOR ADJ BLDG FOUNDATION AND FOR COLUMN FOOTING SWO EXCAVATION UNIT"
DOB Violation #031808CEX01NDC

Then, what may be the final nail in their coffin, the dreaded "BOROUGH COMMISSIONER HAS ISSUED A 10-DAY LETTER OF INTENT TO REVOKE APPLICATION NUMBER 302331616 ON 03/27/08. ISSUE DOB STOP ORDER & NOTE THE PERCENTAGE OF WORK COMPLETED."

On February 14th, 2008 another set of plans was filed and approved for:
PROPOSED UNDERPINNING AND SHORING IN CONJUNCTION WITH NEW BUILDING APPLICATION No.302331616 AND FENCE JOB APPLICATION No. 310057906. The engineer, Jamal Muzaffar P.E. is self- certifying his work. Was he brought in to finish the job? For those who keep track of this sort of thing, Louis Sanchez is no longer allowed to file engineering plans in NYC. I imagine the new engineer will have his hands full seeing to it that his plans are correctly followed by the foundation contractors. 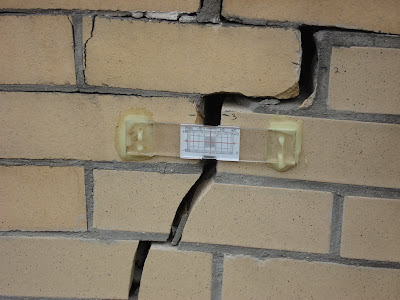 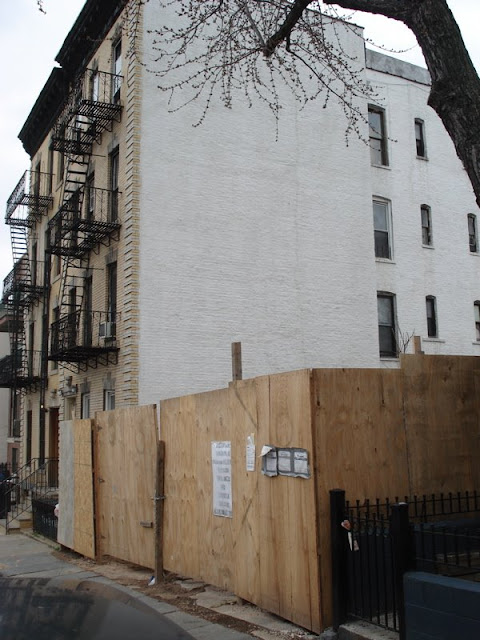 One warning to property owners who have buildings damaged by neighboring construction work... Make sure that when you invite DoB inspectors inside your property to view the damage, there isn't an illegally converted cellar apartment, as the owner of 321 20th Street found out. You may be served a little "salt in the wounds" Vacate Order.
Posted by IMBY at 3:09 PM