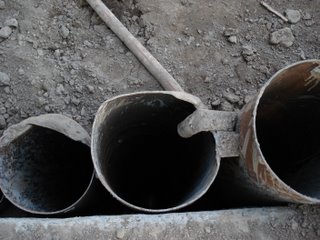 I am not an engineer. I really don't have any experience designing building foundations. The sum of my knowledge has been gleaned from a handful of internet searches. My longtime marriage to a Foundations Designer, in this case, seems to be of little value. Though I can rattle off the bra sizes of many of my wife's friends, the design and construction of supportive undergarments (bras, waist nippers, body briefers and the like) doesn't have very much in common with building an underground parking garage. I have not seen the actual building plans, but comparing steel pilings to underwires is a little bit of a stretch. Speaking of the "Philosophiae Naturalis Principia" an interesting side note. In 1688 Sir Isaac Newton, an infamous cross-dresser for his time, created an alternative theory specifically dealing with corsetry, gravitational attraction, and terrestrial bodies, but it was never published. One of sciences little known "Theories in Crisis" theories. Wern't we talking about parking garages? It's amazing how all my conversations somehow end up in discussions about women's underwear.

I think we lost our way after my mentioning my lack of knowledge. But the lack of knowledge, in general, has never stopped the vast majority of building contractors working in Brooklyn today. Hyperbole? Let's not get our undies in a bundle. Excavating, building forms, bending re-bar and pouring cement goes on all the time. What about pilings being bored the depth of a four story building? Now that's something different for our neighborhood. Here goes my attempt at explaining the process that I have been observing for the last few months. 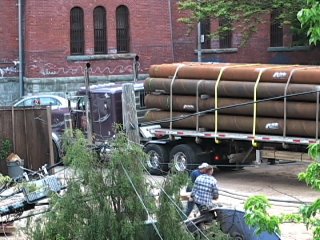 There is a constant whirling hum in the space between my ears. Every few minutes the hum stops for a few seconds and then there is this bone jarringly loud Ca Chang, Ca Chang sound of rotating metal machine parts being violently forced to stop, as if against their will, and then run in the opposite direction. The whirling/whining hum is actually that of the spinning drill shaft of the IMT AF80 Drilling Rig boring holes some 60 feet deep in anticipation of the placement of the hollow steel tube foundation pilings. 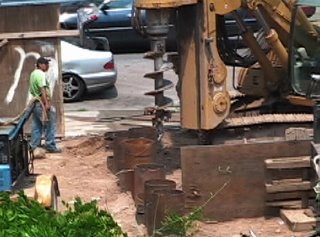 The pounding thud that interrupts the hum comes from its auger, a cork-screw like device with extended horizontal plates. The auger is bored into the ground, collecting soil like a spiral shovel, and then raised up and out of the hole. The thud is the noise the drill shaft makes as it is rotated in the opposite direction at the surface and then stopped, rotated again and stopped, not unlike the actions of a giant hairy robot dog exiting a body of water. Sometime the soil sticks to the blades and then you hear Ca Chang, Ca Chang, Ca Chang, Ca chang, Ca Chang, until the excavated material finally gives up its hold.
This symphony goes on 5 days a week, 7am until 6pm each week day.

Accompanying these noises is a what I can only describe as an Earth shaking shudder. A house shiver. The glass of water on the table vibrates like a scene from the movie Jurassic Park. We see the tiny waves in the puddle, moments before we see the 7 ton backhoe jump from the jungle and smash the steel pile into the Earth,.
It's a predictable little Earthquake: The cracking sound after the lightening flash. The Shoc-o Loc-a, Loc-a, always follows the BOOM by a second or so. A half dozen of my neighbors all feel it. Some have complained. I am amazed at how my baby can now nap right through it.

Bored pilings, according to the "literature" are more desirable in city areas because driven piles require heavy equipment and hammers that produce a level of noise and vibration that is simply not tolerated close to where people live. I remember the summer they used pile drivers at the 1638 Eight Avenue development site. Needless to say the neighbors on Windsor Place were not happy.

In general, construction methods depend on the geology of the site. Glacial sands, heavy clays, and the presence of water make a difference. So what type of foundation system are they using for the Armory Plaza? It doesn't look like a SECANT WALL. Maybe it's some modified form of a secant wall.

Secant foundation walls consist of overlapping primary and secondary pilings. The overlap or interlock acts as a barrier to prevent the migration of ground water between the piles as there is no space between the pilings at all. Usually before one starts to bore holes for Secant Walls, a ground level cement template is constructed in order to maintain perfect spacing and alignment. The wall is constructed by drilling alternating shafts and then backstepping to drill the intervening shafts in order to interlock the two adjacent shafts. Every second shaft is reinforced usually with wide flanged steel sections or rebar steel cages. The reinforced shafts are called the primaries or king piles. The alternate shafts, which are not reinforced, are called secondaries. The drilling sequence typically calls for the intermediates to be drilled first, so the reinforcing of the primary piles will not be compromised by subsequent drilling. The concrete used for the secondary piles is usually lean concrete; to remain soft enough for the drilling and interlocking of the primary shafts. The primaries are usually poured with hard structural concrete. 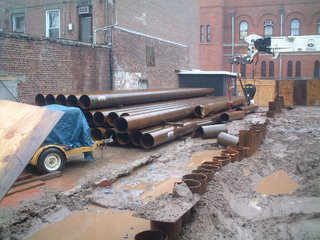 On our site, hollow metal tubes some 60 feet long are being used without any template before drilling. This is how the tubes are being installed. The drilling rig bores the hole. The on-site crane lifts and then lowers the steel piling into the hole. They are being manually aligned with the previous pile so that it is more or less touching its neighbor. The back-hoe then pounds the piling in the final few feet with the bucket arm. The pile is welded to a previously installed pile before moving on to the next. Is this some modified form of contiguous piling foundation? Contiguous walls often have some open space or small gaps between adjacent piles. The size of this spacing is determined by the nature of the soils and if there is significant ground water present. Cement grout is often injected under high pressure behind the piles to fill in the gaps. Sometimes the steel pipes are only temporary, serving as place holders until the cement can be poured. The steel tubes prevent the bored holes from caving in until they can be carefully removed while the cement is being poured. I don't think that this will be the case. I think the pilings will be left in place and used for both the walls of the basement and as a footing for the building. We will have to wait and see how their system will accommodate the vertical loads for the future building as well as a permanent means of retaining the sides of the basement during the excavation. Recently another back yard garden began to drop into one of the holes as it was being bored. They lost a considerable amount of plantings as well as their cedar fence.

A group of neighbors who live along the building site, sent a letter on June 9th to Magdi Mossad, our new DoB Borough Commissioner containing a list of our worries and objections about what has been going on at the site. Mr. Mossad has extensive engineering experience and it is our hope, that, if there is anything fishy going on he will find it. With the indispensable help of a local architect who has taken our case and many other cases in the area pro bono, we listed several things that seem to be outside of the law. One point our architect found disturbing was that only two borings for SOIL BEARING TESTS were filed with the foundation plans and that they only went as far as 36 feet deep. One boring test is required for every 2500 sq. feet and the lot being a little over 12,000 sq.ft. would require a total of 5 boring tests. Also the depth of the borings should extend below the deepest part of the excavation by no less than 25 feet. Our calculations would then have them testing to a depth of at least 80 feet. Time will tell what affects this 100'x100' concrete "dam" will have on the ground water. There is already evidence that the borings on the Eastern side of the lot have hit water.
Posted by IMBY at 11:41 PM

Just discovered your blog. Nice job...well done and quite informative. I enjoyed getting your feel and facts on whats happening in the Park Slope area.
farid