Louis Sanchez and Henry Radusky: Where have we heard these names before? 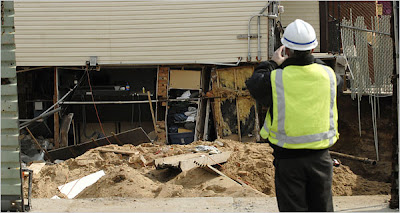 
That's the question that NYC Buildings Commissioner Patricia J. Lancaster should be asking herself. Why is it that the same names always seem to keep popping up when ever some catastrophic building related accident happens in Brooklyn? Why hasn't anyone pulled the plug on these guys yet? Where is the accountability?

I know Ms. Lancaster that you are most likely busy on the phone right now with those over worked folks at the FORENSIC ENGINEERING UNIT trying to get to the bottom of things. Thanks for coming out to Brooklyn the other day. It's always important to be seen as proactive. Can't have this sort of thing, (construction workers being buried alive) happening on a reoccurring basis. My patient neighbors might begin to lose confidence in the Department's ability to protect them from less than professional "Professionals".

Implementation of the Special Enforcement Plan?

“Our Special Enforcement Plan is designed to disrupt the business models of those who intentionally or carelessly put the public and workers at risk by defying the Building Code or Zoning Resolution. We've formed three new enforcement units and empowered them to take action on critical construction issues affecting New Yorkers: repeat offenders; unsafe excavation work; and abuses of the professional certification privilege,” said Commissioner Lancaster. “While our work has just begun, this is a substantial step toward reaching our ultimate goal of ensuring safe and compliant development by making it cost effective to play by the rules."

Business model, what business model? The owner, Mr. William Lattarulo, has eight hazardous E.C.B. violations currently open on his property, some dating back to 5/18/2005. Records show two open ECB violations for work with out permits are also in default, their substantial fines remain unpaid. Of course not paying your ECB violations doesn't necessarily make you dangerous. No one pays these fines that I know of, but excavating while underpinning the foundation of an occupied apartment building in a "shoddy" (according to Lancaster), unprofessional manner with expired permits does, in my humble opinion.

While I can find no permits, currently issued for the address "759 Glenmore Avenue" on the DoB building information web site. There are permits for "751 Glenmore Avenue" the construction site next door where yesterdays Stop Work Order was issued. Greenleaf Construction Inc. is the contractor doing the excavation work for the new commercial building. There is now a violation for "Failure to safe guard the public and property" on the books.

I imagine if we had known Mr. Louro Ortega before the "cave in" took his life, we would have tried to warn him of the potential danger. We would have advised him to find another job where safety matters. Maybe we would have convinced him that what he was getting into was beyond trouble and steered him clear of harms way. But we didn't, and now he's dead.

Having your bell rung.

Most South Slopers are more than familiar by now at least with the Brooklyn architect Henry Radusky of Bricolage Designs, Inc. He even has his own Wikipedia page! That's his job 791 Glenmore Avenue in East New York Brooklyn, the site of yesterdays fatal accident, but do you know his associate Mr. Sanchez, License #046307? I do. By name anyway.

I have never met him, but I've seen his handiwork.
That's why seeing his name in print while reading the Daily News story was like a bullet to the brain. I'm no news paper reporter or journalist by any stretch of the imagination. I'm just a average Joe who happens to have ring side seats to what's turning out to be one hell of an interesting fight. Of coarse I'm talking about, what else, but 406 15th Street in Brooklyn, aka The Armory Plaza. The poster child for... everything. 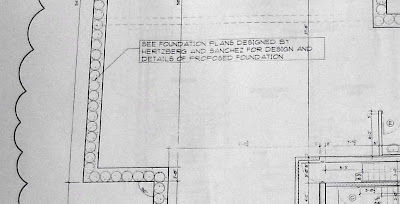 Mr. Louis Sanchez, of Sanchez Associates/PC 295 Northern Boulevard, Great Neck, NY is the engineer of record who not only filed the structural plans for the disastrous Glenmore Avenue job, he has also worked on and supervised the structural/foundation designs for The Armory Plaza.
The infamous Armory Plaza?... 406 15th Street in Brooklyn?... Come on, surely you of all people, Ms. Lancaster, are one of my loyal 34 "hits" per day. Have you stopped reading my blog? Does anyone remember what happened at 1504 Eighth Avenue on July 25th, 2006? That's the day eight families were ordered to vacate their apartments at a moments notice after huge cracks formed through out their brick walls and the building began to sink. Sounds familiar.

"Engaging in acts of gross incompetence or gross negligence on a single occasion, or for some, negligence or incompetence on more than one occasion" can get you in trouble with New York State Education Office of Professional Licensing. They discipline engineers and architects by suspending their licenses and/or imposing fines. The future doesn't look so brite for Mr. Sanchez any more. The loss of his license may be the least of his worries.

According to the DAILY NEWS story writers MATTHEW LYSIAK and TINA MOORE,

Lancaster said her office was talking to Brooklyn District Attorney Charles Hynes about criminal charges for both Lattarulo and the project's engineer, Louis Sanchez of Sanchez Associates PC.

A spokesman for Hynes said the two men could face a "wide range" of criminal charges, including reckless endangerment.

Sanchez had lost his privilege to perform engineering jobs in the city a week earlier because of "questionable practices," Lancaster said.

The department penalized him after a new special enforcement team found he was allowing his business partner to use Sanchez's professional stamp to submit applications. His partner surrendered his privileges in 2002.

"The excavation team is tracking excavation sites across the city and holding engineers and contractors to a higher standard than ever before," Lancaster said. 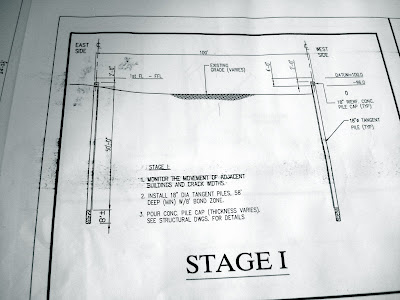 406 15th St. foundation plans-Is this just an informal suggestion or a legal requirement?
STAGE 1. 1.) "MONITOR THE MOVEMENT OF ADJACENT BUILDINGS AND CRACK WIDTHS"


There are still many engineering questions to be answered yet. I wonder what future role Sanchez Associates, if any, will have in the completion of the Armory Plaza. The next few months should be enlightening to say the least.
Posted by IMBY at 10:15 AM

It is unfortunate that some professionals act less than professional. Last summer, the NY State legislature enacted legislation to get tough on professionals who fail their obligations. They did not bother to license contractors who make the money and actually create all of the damage. Nor did the legislature fund the State Ed Dept to go after those who practice engineering and architecture without a license. As an agency, the DOB has gone to great lengths to work with professionals to raise the bar as well as to punish those who fail. Construction involves not just the professionals, but the owners and contractors as well.

2008 Disciplinary Actions from the Department of Buildings