'Too Tall Radusky" speaking before a class of young entrepreneurs at Brooklyn College on the trials and tribulations of being a practicing NYC architect.
For those of you who want to cut to the chase I recommend jumping to the 8:07 mark where he briefly addresses building and zoning codes or maybe the 11:23 mark where he acknowledges that builders have the desire to cut corners that can jeopardize workers and the publics safety.

98% of my clients want to max out their buildings and take advantage of every loophole in order to reap the biggest rewards.


Judging by news reports, Radusky and Bricolage Designs seem to attract a certain kind of developer, builder, engineering firm…It would have been interesting to hear him speak candidly about his relationships with many of the more unpopular developers in Brooklyn. 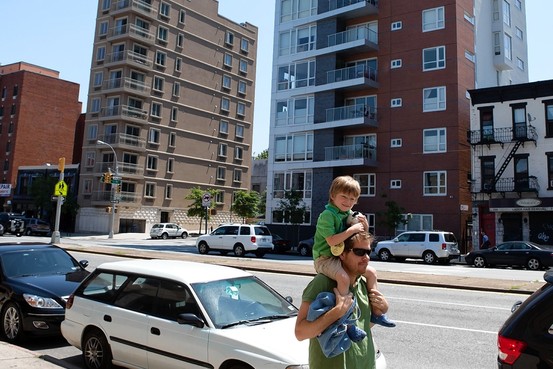 543 Carroll St., left, and 560 Carroll St., right, are prime examples of the new apartments on Fourth Avenue. Ken Maldonado for The Wall Street Journal
Just as great architecture can lift the spirit, bad architecture can crush it.
In few parts of New York is this more the case than with the rash of new apartment buildings along Brooklyn's Fourth Avenue, the six-lane street that runs south from Atlantic Terminal and cleaves Park Slope from Gowanus. Because of bad decisions by Amanda Burden's City Planning Department and the profit-above-all-else motive of some developers, Brooklyn is going to be stuck for decades with this depressing wasteland of cheap materials and designs.
Just how bad is Fourth Avenue? Consider the latest addition, a 12-story rental apartment building under construction at Fourth Avenue and 6th Street. It was designed by Karl Fischer, an architect with offices in New York and Montreal who has been criticized for his numerous slap-em-up buildings in other parts of the city.
A rendering shows the new condo to be bland and uninspiring. But it says a lot about Fourth Avenue that compared with the eyesores that were built before, it's actually an improvement.
Sadly, the damage already is done. Fourth Avenue, anchored at the north end by the sublime Williamsburgh Savings Bank Tower, could have one day become one of New York's grand avenues, a broad street full of life, mixed uses and appealing architecture.
But the Planning Department lacked such foresight in 2003 when it rezoned the noisy avenue to take advantage of the demand for apartments spilling over Park Slope to the east and Boerum Hill and Gowanus to the west. Focused primarily on residential development, it didn't require developers to incorporate ground-level commercial businesses into their plans, and allowed them to cut sidewalks along Fourth Avenue for entrances to ground-level garages.
Developers got the message. With the re-zoning coinciding with the real-estate boom, they put up more than a dozen apartment towers, many of them cheap looking and with no retail at the street level, effectively killing off the avenue's vibrancy for blocks at a time.
The city finally got wise and passed another zoning change last year, correcting some of these mistakes. But it was too late. Walking along parts of Fourth Avenue today is like walking in the suburbs, bereft of the interaction between pedestrian and building, except for occasionally having to dodge a car darting out of a garage.
"Not every building has to be a masterpiece, but I think developers owe it to the community to pay attention to the fabric of the city and the urban landscape," says David Briggs, an architect who lives in the area. "On Fourth Avenue, that just didn't happen."
Ms. Burden declined to be interviewed for this article. A spokeswoman for her office claimed in an email the city's policy has been a success because of the hundreds of new residential units developed along Fourth Avenue.
But the spokeswoman acknowledged that the early buildings developed after the 2003 rezoning "failed to engage the street by placing garages and other unattractive uses on the ground floor" and did not bring a "vibrant mix" of ground-floor uses. "It was not a concern at the time that development controls would be needed to prevent the negative aspects of development that has occurred on Fourth Avenue," she wrote.
Of course the Planning Department was only partly responsible. Some of the architects responsible for middle-brow architecture along Fourth Avenue are surprisingly candid about the other cause: They pass the buck to the developers who hired them and the pressure they faced to cut costs at the expense of aesthetics.
"I try to do my best for my clients and try to get them as big a building as possible," says Henry Radusky, a partner with Bricolage Architecture and Designs LLC, which has built nine buildings along Fourth Avenue in the last decade.One of Mr. Radusky's buildings was 586 President St., one of three buildings on the same two-block stretch of the avenue that contribute to its canyon of mediocrity look. Another is the Novo Park Slope, at Fourth Avenue and 5th Street, a pallid, prison-like structure with parking and a medical facility at ground level that towers menacingly over its next-door neighbors. Each Radusky project looks like a slapdash building with blank, deadened bases that add nothing to the street.
"We're always urging our clients for better architecture. Some of them go for it, some of them don't. It is a shame, no question about it," Mr. Radusky says. "The city gifted these developers with a really profitable zone, and not everyone took advantage of it to build good architecture."
Gregory Rigas, the developer of 586 President, and Isaac Katan, the developer of the Novo, couldn't be reached for comment.
The rendering of Mr. Fischer's new building shows a massive, blocky, 12-story hunk of steel and glass, in cool blacks and silvers, with three floors of penthouses, set back from the building's base with small balconies strapped on. It's nothing special, but at least the building has more than 3,000 square feet of ground-floor retail space, in bays along Fourth Avenue, and just one small, garage-like parking entrance on 6th Street.
"The Fourth Avenue corridor was a major blemish for Amanda Burden," says Drew Popkin, development director for the Naftali Group, the project's developer. "But is it too late to rectify that? Certainly not. This is just the beginning for Fourth Avenue."
The spokeswoman for the Planning Department says: "We learned from this and from re-zonings in other parts of the city." After Mayor Bloomberg leaves office at the end of 2013, Ms. Burden may be replaced as head of the Planning Department as well as chairwoman of the Planning Commission. Let's hope her replacement makes his or her mistakes before taking power.

The architects of a Brighton Beach condo complex that collapsed — killing a worker — have a troubled history of flouting regulations, the Daily News has learned.
Douglas Pulaski and Henry Radusky were forced to surrender some privileges in the past because of problems with projects, city records show.
“They have been known by the Buildings Department for many years to operate on the fringe,” Assemblyman James Brennan (D-Park Slope) said Wednesday.
He said that in 2005 he demanded the Buildings Department review all projects submitted by their firm, Bricolage Architecture and Design.
And he said the agency should have had them in its “line of sight” before the five-story development on Brighton Fifth St. crumpled Tuesday as concrete was poured.
Officials said concrete is normally spread from the bottom floors up — but the contractor started with the third floor and was working down.
Jerry Gargano, who delivered 67 cubic yards of concrete to the site Tuesday, said the contractor may have been trying to save time.
When concrete is poured top down, the line pump needs to be primed with lubricant once. Working bottom up, pipes must be primed for each floor.
“If you’re starting from the bottom, it takes longer to set up,” Gargano said.
When the building collapsed, five workers were injured, and one of three men pulled out of the rubble later died. He was identified as Ivan Lendel, 54.
It’s unclear if Bricolage was on site when the concrete was laid, but a former Buildings Department official said architects or an engineer should have been there.
“Professionals would never have allowed pouring concrete in this way,” the ex-official said. “In fact, skilled union workers would not do it. Not ever.”
In 2009, Pulaski surrendered his self-certification — his right to certify that design and construction comply with codes, records show. Radusky, surrendered his self-certification privileges in 2002 for a year after inspectors found problems on 55 jobs.
It wasn’t clear if the duo had regained those privileges. Bricolage did not return a call, and the Buildings Department did not respond to questions about the architects.
The city issued nine violations to SP&K Construction after the collapse, but more are expected as the probe unfolds. The federal Occupational Safety and Health Administration is also investigating.
tconnor@nydailynews.com