Make their dreams come true, for a change.
Before we start, understand that these pre-preliminary architectural renderings are just that, very preliminary. They can and most likely will change. We're talking colored pencil here, not cinderblock.  No actual Buildings Department filings have been made yet. No environmental impact, shadow or traffic studies have been executed. Soil boring tests haven't even been undertaken. What we are looking at then is what the developers, the Halkias', say is essential for their business' survival in the 21st century... What they want to continue to make their dreams come true, as they say in their flyer.

"Think of it as a magnificent cake with a cherry on top."
Dream if you may a magnificent garage... Four hundred off street parking spaces to be contained within five floors, one at cellar level and four more to be street level and higher. On top of the garage will sit the hotel, 166 rooms on seven additional stories to top off somewhere below 120 feet or eleven stories total, not including bulkheads and other permissible roof obstructions like AC chillers, cell phone antennas, and elevator control rooms of coarse.

This grand vision all depends on acquiring a crucial zoning variance upgrade from their current R6B residential zone. Possible requests may include a site specific commercial overlay up-zoning to C4-3, C4-D, or less likely C8-4.

A variance is a discretionary action by the Board of Standards and Appeals which grants relief from the use and bulk provisions of the Zoning Resolution to the extent necessary to permit a reasonable or practical use of the land. A variance may be granted, after a public hearing, when unique conditions on a specific parcel of land would cause the property owner practical difficulty and undue hardship if it were developed pursuant to applicable provisions.


In this case, according to their own lawyer, The Grand Prospect Hotel developers would have a hard time proving "undue financial hardship" in order to get a variance. GPH is a thriving business.

Take a look for yourself at the pictures below and feel free to comment. I suggest you contact Mr. John Burns, the chair of Community Board #7s  Land Use Committee directly with any questions or suggestions.  Link to CB#7 email.
Public input is being welcomed at this point.  You might actually play some small part in the way this turns out. Speak now or forever hold your peace.

One general impression is that some South Slopers are salivating over those 400 spaces.  They would gladly live each day in the shadows if it meant there was a warm parking space awaiting their Volvos each night.  My only wish is that Mr. Halkias and Doban Architecture understand that this new hotel building will essentially define our skyline forever. 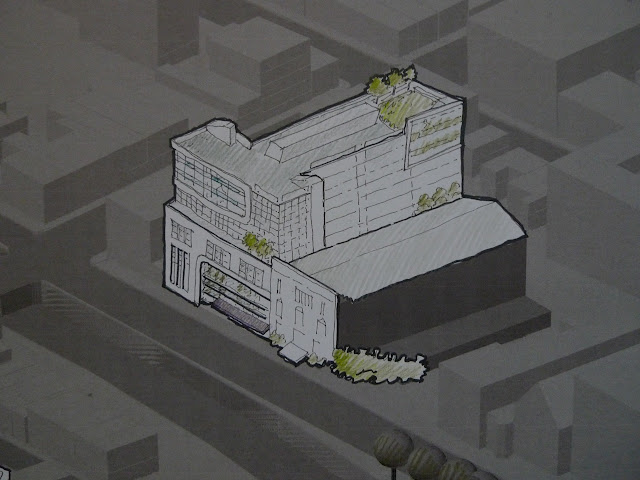 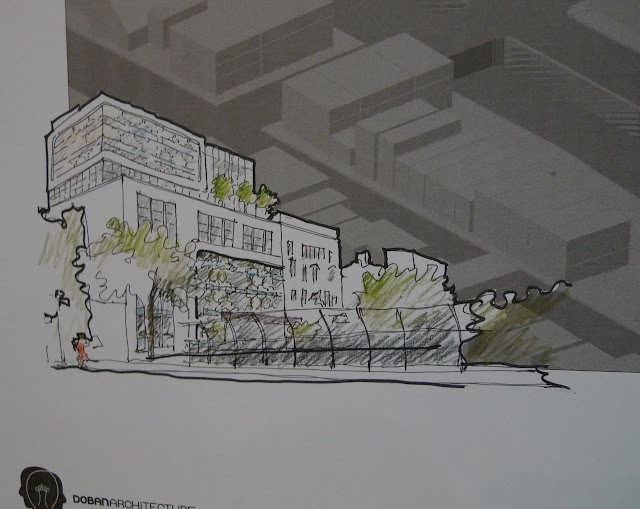 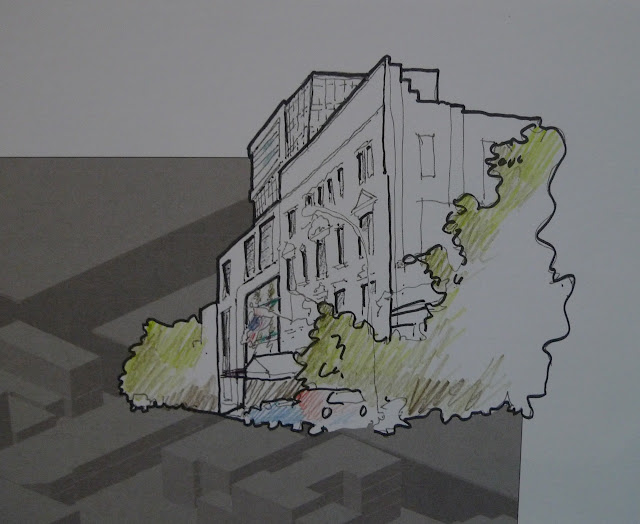 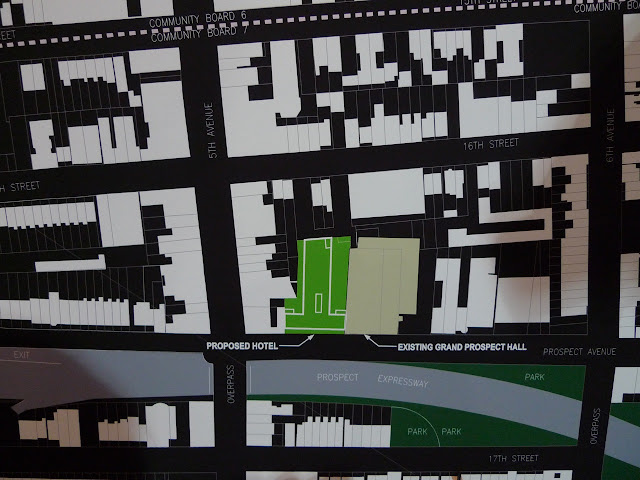 Post Script: I guess that when I wrote yesterday that the feelings expressed during the presentation were "mostly positive" I should have mentioned that there were a few people in attendance who voiced serious misgivings about the impact this new hotel will have on the already overburdened surrounding infrastructure.   One individual in particular gave testament to how this section of the South Slope, 16th Street below 6th Avenue, is the ground zero for real property speculation.  There are at least a dozen new buildings within a block's circumference.  Hundreds of new units have or will soon be occupied straining an already taxed water, sewer, and electrical grid.

These new residents, with young children, generally more affluent then those before them, own automobiles.  There is a perception by some that a serious shortage of available  on-street parking spots exists now that did not exist a decade ago.  This is the carrot that Mr. and Mrs. Halkias are holding out to our community in the hopes of garnering enough public support to get his zoning variance pushed through.  They know the B.S.A. would never permit their project unless it had significant political muscle behind it.   Here's one reason why the presentation was made... To judge the neighborhood's temperament.  Otherwise they would have gone strait to the Board and made their appeal.   Just a short five years ago, the South Slope had one of the fastest downzonings for any neighborhood in recent NYC history.   The folks at The Grand Prospect understand the power the community wields and it seems neighborhood opposition to the proposed hotel/parking garage in it's current configuration is now mounting.

As a resident of 16th St., I am not happy about this proposed hotel at all. It will completely change the nature of our block from residential to commercial and that is unacceptable.

It's just really sad. He could've started with a more tasteful design not something so gluttonous. He clearly doesn't care for the neighbors adjacent to his building. This absolutely sad and disgusting!

Thanks for posting all this information. I live around the corner and haven't heard a word about it. What is clearly missing from this presentation is a shadow diagram. With this monstrosity on the South side of them, 16th street residents could say goodbye to the sun, forever!

I hope all the people "salivating" for the 400 car parking understand that this in a CONDITIONAL offer when GPH doesn't have any events, the same goes for the hotel. Equal to expanding their infrastructure will be more events line up, so folks...think it about it, Mr. Michael is not altruist, he is just a greedy businessman with not concerns for the neighbors and neighborhood.

Although I know longer live in the SoSlope, I remember a CB6 meeting I went to once about some other monstrosity being added to a previous close-knit neighborhood... all the the old-timers cared about was: PARKING SPACES. The GPH owners obviously know where the soft spot is...