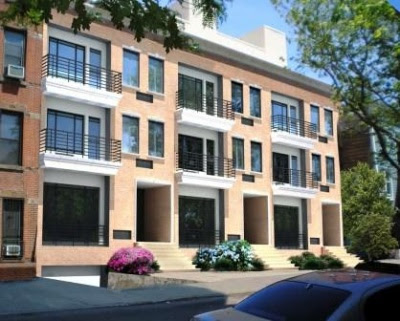 
What may be something of a rare and unusual occurrence in Brooklyn's South Slope- A new condo development that actually improves on what existed before without disrespecting and disrupting the quality of life for the surrounding pre existing neighborhood. Maybe this is only possible because the developer/architect/builder has plans to occupy one of his units and has been on the job site from day one, personally handling most of the common construction problems before they become nightmares for the neighboring property owners. As recent developments go, this one may be a dream. In the end, I guess it will depend on whether any promises made end as promises kept.

If I was in the market for (let's be honest, if I could afford) new construction in the South Slope, I would definitely try and attend the Grand Opening Party this Thursday June 7th at 6pm and the Open House on June 10th from 12-4pm. I don't think these will stay on the market for long. Maybe I wouldn't even wait that long.

From the outside everything looks to be top notch. For a pre-party look at what awaits on the inside check out the Dimora's web page. Try out the virtual walk-through tour. My only complaint is that the web site is vague as to how the 21 Units are being divided up. No square footage-No prices listed. There are floor plans however. (What no bathtubs or closets!) I guess you can work out the details over wine and cheese later in the week. Update: Prices range $479,000 -$769,000 for between 645-1160 square feet. Thats about $750 per foot.

The closest competition, and I mean that geographically and not aesthetically, is Karl Fisher's "timeless and enduring" Suite 16 farther down 16th Street below 6th Avenue. For comparison sake, there is currently a luxury 2 bedroom 1460sf condo for sale in Suite 16 for $1,115,000.
The prices of private one and two family row houses on 16th Street have continued to rise, and now hover around $1.4 million. If you ask me, 16th Street between 7th and 8th Avenues is the most appealing location. Now if we can just figure out where the 21 new families are going to park their cars.

Some "Before" and "During" photos. 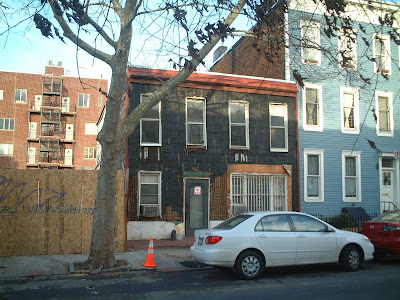 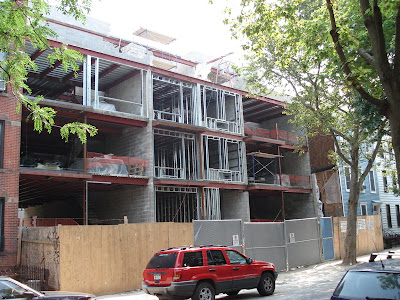