"So many ways to beat the system"


Mr. Kates and the Daily News have begun an in depth, 4 part series of reports entitled "Building Boom-Doggle" that look at how NYC's "biggest building boom in more than 30 years has spawned a cadre of scofflaw developers in every borough who routinely violate building codes, flout zoning regulations and ignore basic construction safety".

Arnold Rosenshein, the owner of the severely damaged and now vacated 1504 8th Avenue building, has sued the LoCiceros' business, their architect Henry oh no c of o Radusky of Bricolage Designs, Inc. and construction companies working on the project. The LoCiceros have countersued, insisting that cracks in the building existed before work on Armory Plaza began. For a quick reminder of how the cracks first started just click on the picture below. 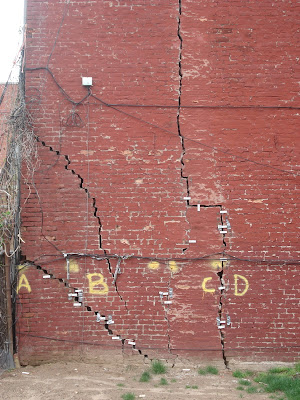 -Rev. Stephen Christopher on the recent damage to the Memorial Baptist Church.

"The pounding has undermined our property," he said. "They have ruined our fence. We have had several cave-ins in the yard. The stoop steps are beginning to crack. The driveway is cracked, and there is a crack in the wall of our auditorium."


What's shaking, and who's really doing it.

According to the Daily News, the LoCiceros' lawyer Mr. Ravi Batra, has called the complaints a "shakedown attempt".

A little reminder of the kind of "construction work" that went on and on for weeks less than 5 yards from both Mr. Rosenshein's property and that of the Memorial Baptist Church.