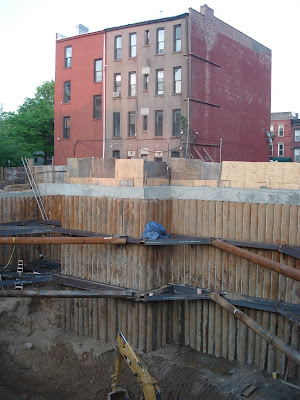 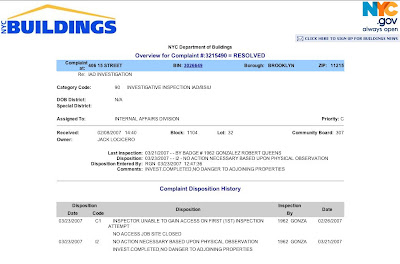 "No danger to adjoining properties" 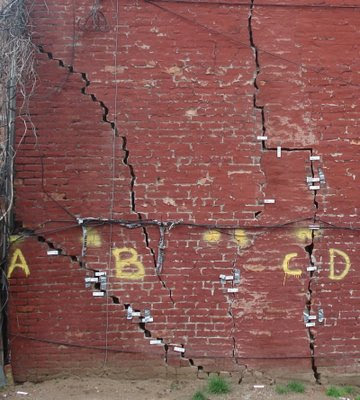 On April 23rd, just one month after the Internal Affairs investigation was completed, 1504 8th Avenue took a turn for the worse. Over night new cracks formed and the existing cracks widened causing the Department of Buildings to issue a new Stop Work Order and to impose a forced evacuation of The Memorial Baptist Church's parking lot. What happened? Why was the excavation allowed to continue before 1504 8th Avenue had been stabilized and steel bracing installed? How could it even be possible to stabilize and underpin the damaged buildings rear foundation wall if the surrounding soil has been disturbed to the depth of some 60 feet? Surely the entire rear foundation wall is no longer resting peacefully on solid ground. Why no additional steel bracing on the damaged rear facade? There are at least a dozen cracks between the many windows.

Certainly the people living in the attached building at 1502 8th Avenue deserve some reassurance that someone is looking out for their well being. I don't think I could continue to live just 10 feet from the precipice knowing my life rested in the hands of the Armory Plaza Gang. The Partial or let's say Half Assed Stop Work Order barely in place for a week would have been a good time to reflect on every one's future. I am not sure if these IAD investigations are part of the public domain, but I think the information would be helpful in understanding what went wrong. Are the engineering conditions at this site so unpredictable that no one can really know for sure what's what? In this case we are being told to rest assured that 1504 is being monitored, yet its safety is now and has always been in doubt. No tiny plastic crack monitor will change my mind. We should hope that the investigation would be reopened.

Looking back it's actually a good thing that the investigation completed March 23rd didn't include a thorough examination of the surrounding properties . From what I have been told, no one ever looked at the recent cracks inside the Memorial Baptist Church. No one attached to this special investigation unit, to my knowledge, ever came by any of the properties along the rear 16th Street side of the excavation line to check on the cracks or sink holes. In a vindicating way, it may be better to have been overlooked and ignored than to have been inspected and told that there is no reality to your complaints, or worse, that the damage existed long before the construction began.
There exists a well documented history of 311 complaints on the Departments own BIS web page with home owners questioning the safety of the foundation work and its impact on their adjoining buildings. This would have been a good place to start looking. Maybe the inspectors could have stopped by to watch the videos and have a peek at the before and after photos.

Wouldn't it be nice if there was some kind of government agency in NYC, with the power to impose monetary fines on developers and their contractors when they have been caught breaking the rules?

You would think that might act as an effective deterrent; An incentive for everyone to do the right thing. It should work... Except when all their fines are dismissed as in the case of the Armory Plaza. In that instance I don't really see the point in bothering. If I was an inspector it would be disheartening to see all my hard work routinely ignored.