Like a virgin, being touched for the very first time.

"When the little dwarfs came home at night they found Snow-White lying upon the ground. No breath came from her parted lips, for she was dead. They lifted her tenderly and sought for some poisonous object which might have caused the mischief, unlaced her frock, combed her hair, and washed her with wine and water, but all in vain-dead she was and dead she remained. They laid her upon a bier, and all seven of them sat round about it, and wept as though their hearts would break,"

-From Snow White and the Seven Dwarfs

In the familiar animated Disney version of Snow White, the Prince, already deeply in love with Snow White, arrives in his search for her, raises the lid of the glass coffin, and offers "Love's first kiss''. She then awakens after three days with great delight into his arms as the proprietary forest animals and Dwarfs rejoice at her resurrection.

In the original Grimm Brothers' slightly different version of the story, a Prince just passing through the forest, sees the beautiful maiden in the coffin, and persuades the Dwarfs to let him carry it off with him to his kingdom. When they stumble over a shrub while carrying the coffin, the piece of poisoned apple is dislodged from Snow White's throat, and she awakens to his open arms and a declaration of love from the Prince follows.

In the Disney version the story ends with the wicked Queen falling off a cliff after being struck by lightening. The Grimm Brothers have the old hag attending Miss White's wedding, but then dancing to her death in a pair of red-hot iron shoes.

Prince Karl Fischer
On February eighth two thousand and seven, building permits were once again renewed by Prospect Terrace, LLC on that very troubled lot, 1638 Eighth Avenue. Five years in the unmaking, this sleeping condominium has been poisoned by unsafe and defective excavation and shoring work. Residents on Prospect Avenue have complained about lost earth, sinking back yards, defective retaining walls, and excessive vibrations that were judged bad enough by the D.o.B. to shut the pile driving down. Oh, and the water...


If Snow White teaches us anything, it's that if we wait passively, quietly, patiently, remaining absolutely still in our prettiest dresses, then someday our Prince will come and everything will end once more, happily ever after.

Snow flakes falling from the sky like unharnessed day laborers. What yonder magic "a two inch thick blanket" of fresh snowfall has to transform a shit hole into a pristine winter wonderland of possibilities. Mother Nature may have thrown a white tarp over this frozen corpse, laid out between Prospect Avenue and Windsor Place in the South Slope, but now I'm feeling rejuvenated once more. I haven't felt this giddy since I drank all the "water" from my son's Curious George snow globe. Regardless of my past mistakes, my flaws and failures, I feel like anything is possible. Wonder Works Construction, all is forgiven. 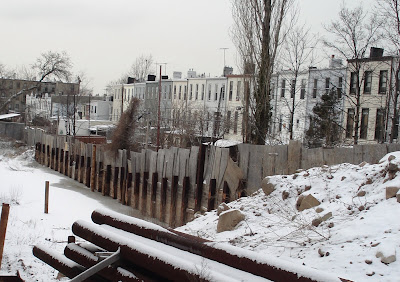