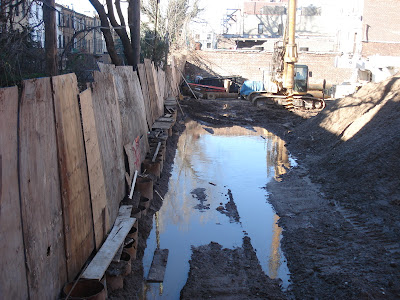 The last of the pilings along the rear property line were installed this week. This just about completes the entire perimeter wall. About half way through this rear line, the Armory Plaza Gang switched methods again, returning to their original two step process of first boring down to a 6o foot depth and then, lowering the entire piling down into the hole. This requires using the larger auger bit, and as the ground subsided, the sink holes began to return in full force. The disappearing ground was 'remedied' by adding the necessary amount of soil to the surface on top of the settled area.

So now after many months and several different attempts at damage-free drilling, what conclusions can be made? For one, it turns out that all the methods employed require at least 10 feet to absorb the 'disturbance' resulting from the removal of the soil during the boring. Any structure located with in that ten foot damage zone was adversely affected. If we factor in the parking lots existing 4' deep concrete foundation which acted as a kind of buffer/retaining wall during the drilling, my calculations of a 10 foot damage zone may actually be way off. The distance may be much larger still. Anything in this zone, above and below ground, including adjacent building foundations (1504 8th Avenue), trees, telephone/utility poles, fences and surface level structures like brick patios, garden gnomes, lawns and shrubs had a hard time remaining , plumb, true and sober looking.

The second thing we figured out is that dumping soil on top of an active sink hole is basically a cosmetic correction. It may take years before the ground beneath our feet stays put. In the future, when say building a fence, finding undisturbed soil to set support poles will be hard to find. 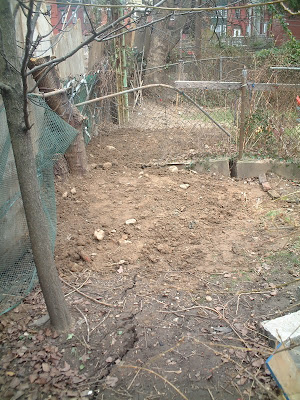 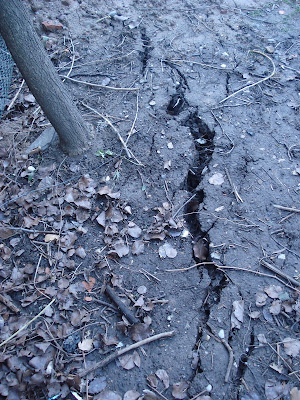 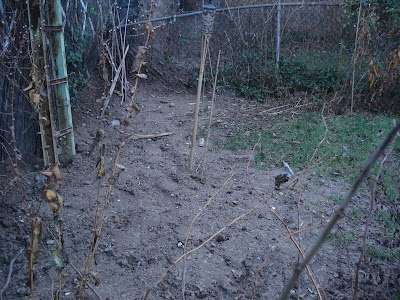 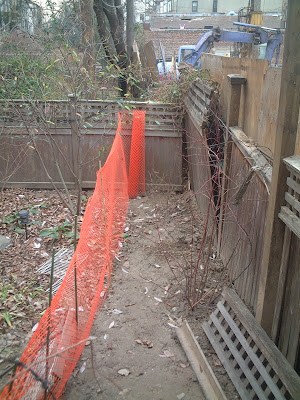 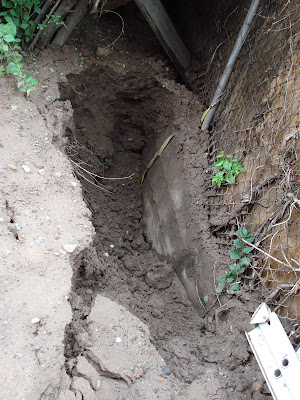 Looking back one and a half years ago, when the contractors attempted to install a new construction fence on all of the adjoining properties, they said at the time they would "only need 10 feet" in order to maintain a proper level of protection to the public. At the time this seemed to be an over exaggeration, but now with hindsight, it appears to have been right on the money. Lucky guess, or knowledge gained from years of experience?

The final push to complete this part of the job resulted in the 25' flowering pear behind 391 16th Street to fall over and rest on the plywood fence. No attemp was made to straighten the tree. Big cracks opened up in the ground prior to its fall. Most if not all of the chain link fences running perpendicular to the site's fence have been damaged, their upper rails noticably bent down. Only time will tell if the very large Mulberry tree will last through the next big Nor'easter. It seems intent on falling. History recalls how these disturbed areas have a nasty tendency to continue sinking weeks, and months after being filled.

The men operating the equipment have assured everyone concerned, that all repairs will be made to the property owners specifications when the building is finally finished, however many years from now that may be...like maybe in 2009, when who's to say "what was what" before this epic construction project began. In the end It will be interesting to see who settles first, the ground, or the developer's contractor.
Posted by IMBY at 4:07 PM