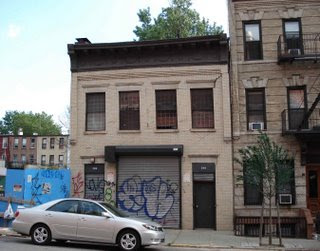 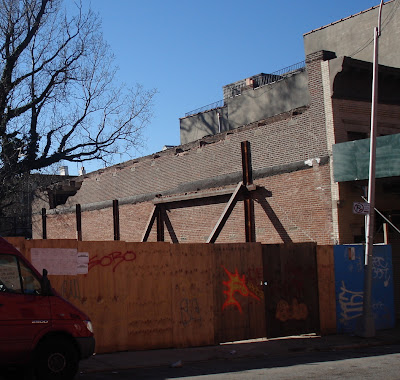 When the sidewalk shed went up in front of 396 15th Street recently I thought for sure it was a sign that the two story loft like manufacturing building was about to be taken down. Badly damaged, visibly leaning, cracks running every which way through front, rear, and side facades, it seemed there would be no reasonable way to save her from complete demolition. Plywood fences and scaffolding in front of an existing South Slope building is more often than not, an omen of a forth coming demolition these days. Anyway, back in July of 2005 a violation was issued to 400 15th St. L.L.C. for "failure to protect adjoining structures during ecavation" specifically noting the lack of underpinning at the time of the inspection.

Surprisingly, this week workers started on what can be described as major surgery to remove and replace the Eastern most brick wall that runs the full depth of the lot. 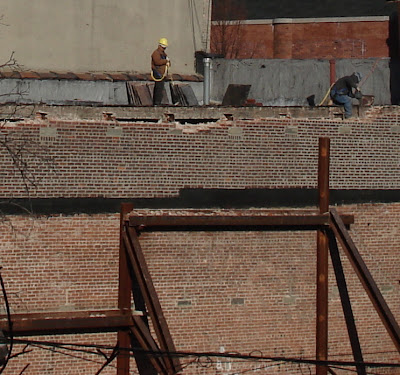 A DoB permit was granted to "UNDERPIN EXISTING FOUNDATONS AND REPL.ACE 700 S.F. SECTION OF MASONRY WALL IN CONJUNCTION WITH NEW BUILDING CONSTRUCTION AT 400 15TH STREET. THERE WILL BE NO CHANGE TO USE, OCCUPANCY OR EGRESS UNDER THIS APPLICATION"

Robert J Palermo of CORPORATE DESIGN OF AMERICA, P.C, is filing for this job. Corporate Designs of America is the same firm who designed the neighboring 400 15th Street development. 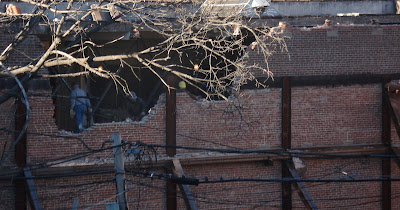 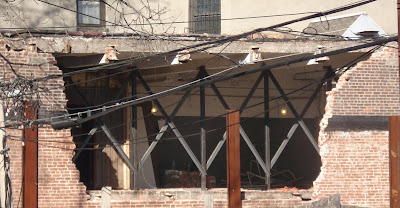 Prior to this weeks demo, it looks like the entire building has been temporarily re-engineered to pick up and transfer the roof loads and maintain stability through an internal system of criss-crossing steel beams.
Well, let's hope that as soon as repairs are completed, then maybe the Stop Work Order on 400 will be lifted allowing work to resume. Even after winning it's plea before the Board O' Standards and Appeals, for months now, the development at 400 15th St. has languished in despair and neglect. The half completed basement foundation/bathtub maintained a consistant foot or more of standing water througout this past summer and fall.

Something of a rarity in these parts, contractors wearing safety harnesses and hard hats while performing demolition work.
Posted by IMBY at 7:34 AM