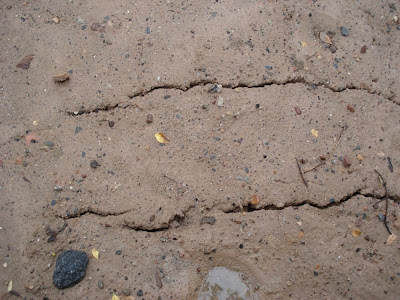 The last time we left off, the Armory Plaza Gang had finished installing the pilings for three of the four sides of the foundation, leaving only the rear lot line to complete.

It looks like the remaining foundation piles will now be installed using a alternative system where the drilling is done inside the pipe. This change may be an attempt to deal with the subsidence (sink hole) problem that has plagued the project from the very beginning. What can be done about the unsettling settling? 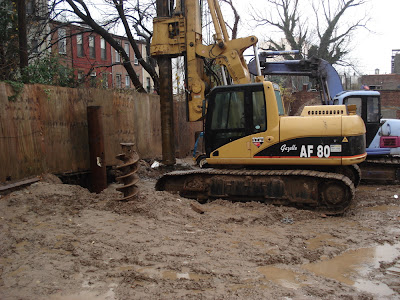 In the past the boring rig would drill down through the ground to the specified depth of 55+ feet and then a crane would lower the entire 60 foot length of hollow steel piling into this waiting hole. This involved repettively drilling a distance, removing the soil, drilling a distance, removing the soil, over and over again. In using this boring method, a hole is sometimes created that is much bigger than the 18 inch width necessary to accomodate the piling. Gradually the soil surrounding the piles sinks in as it tries to fill in the underground voids left by the repetitive "in and out" movements of the auger. 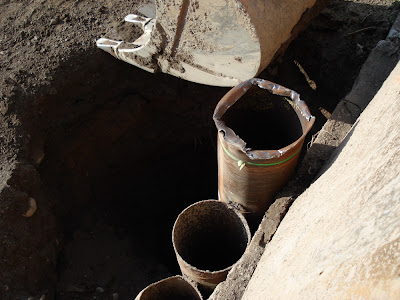 The new technique appears to work by first boring a much shorter distance, maybe 6 feet total, then with the help of a crane, a 12 foot section of pipe is imediately lowered into the hole. This section of pipe is then forcible driven down into the earth leaving the end slightly above ground level. By forcibly, I mean a metal or wood plate is placed over the end of the half burried pile to cover the opening, the drill bit is removed, and then the rig's mast is used to pound the pile into the ground. It can take 50 or more blows to set the pile.

Next a narrower auger bit is used, one that can fit inside the pipe during the drilling process. I suppose this short section of pipe acts as a kind of protective sleeve, surrounding the auger during drilling and preventing the surface soil from being excessively disturbed. After drilling down an addittional distance, the process repeats itself with the next 12 foot section of pipe brought over and welded onto the end of the previously placed pipe section, until the full depth of 50+ feet is reached. No more voids? No more sink holes?

How is it working out so far?
Not so well. Besides being a much, much, slower process, the piles now have to be driven into the ground causing considerable noise and vibration. One reason boring rigs are used instead of pile drivers is that they are "kinder and gentler". Pile drivers are not acceptable in residential neighborhoods, so using the rig to pound in the piles becomes counter productive. 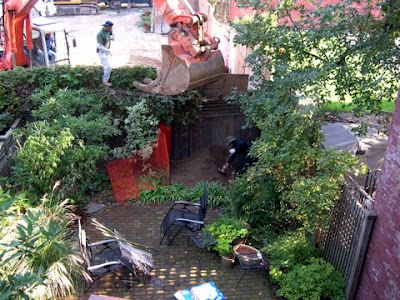 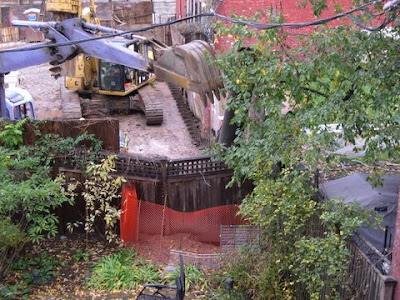 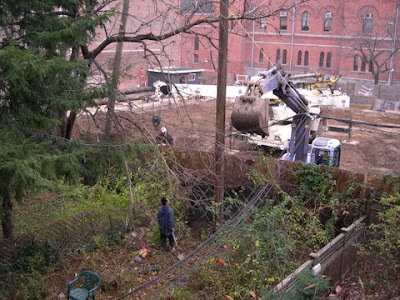 The sink holes are still forming at the surface. Several large loads of dirt have been dropped over the fence into the backyards of 397 and 399 16th Street in an attempt to fill in the most recent sinkholes.

In this video clip 397 16th Street is being filled in by the backhoe with a worker on the ground redistributing the soil with a hand shovel.


This back filling may be in response to the recent 311 complaint made by someone living in the apartment building where the sink hole formed. (397 16th, is a 4 story walk-up that is, coincidental, for sale through John P. Burke Realty 718 768-1001).

After the recent heavy rains, another sink hole (photo below) opened up along the Memorial Baptist Church fence line. This is in an area where no one had worked around for some time, indicating that this settleing process continues, even after top fill has been added. 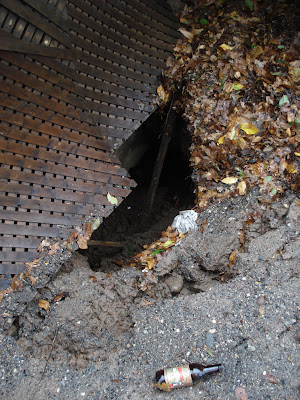 Cover Ups
Most recently, additional soil was again deposited over the fence at 397. This time the video shows the backhoe lifting a worker over the fence and lowering him back onto the ground. You can see him spreading the soil about, filling in the holes, and then, ... covering up the recently deposited soil with fallen leaves. Now I must point out that if the owner of the property has given his/her permission to make these repairs then there is nothing out of the ordinary with these corrections. Repairing damage to your neighbors property in the coarse of an epic construction project is commendable. But if the owner has not been contacted, this leaf spreading could be interpreted as something more duplicitous than just an obsessive case of Kenophobia manifesting itself through some bizarre "Rites of Fall" choreography.

Oh DoB, why have you forsaken me?

What can we expect in the near future? Is it polite to ask the bull to wipe his hooves before he enters the china shop? Looks like another month or so, at least, before this part of the job is finished. Recent conversations with the developer have been less than fruitful. He has recommended that we call 311 with our complaints. The Department of Buildings has more or less washed their hands on this sordid affair, claiming that they have done everything possible to insure our safety. Simply put, they just want to build their new building and we just want to hang on to the ones we already have.
Posted by IMBY at 1:54 PM