Get your permission slips ready. We board the shortbus for a quick trip down the block to another troubled building site, located at 226-230 16th Street. 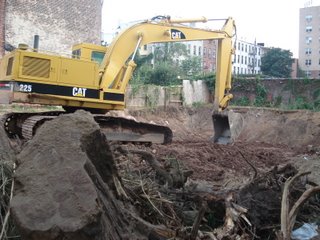 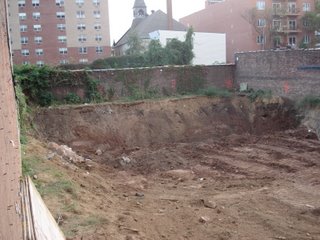 Last January and February neighbors complained about the unsafe demolition being performed by Marie Grasso's Staten Island based demolition company MMG Design, Inc.
In late January neighbors complained to the Department of Environmental Protection about the questionable asbestos abatement being done by a sub contractor. Workers dressed in white protective suits and air masks were chopping away at the building's roofing material, causing debris to fall onto the sidewalk. MMG has had problems with asbestos abatement in the past as this July 27, 2005 story from THE JERSEY JOURNAL describes.

On February 2nd, the developer, 16th Street Development, L.L.C. was issued a violation for "work with out permits".

On February 8th, MMG was cited by the DoB for "failure to do adequate housecleaning". Apparently the demo was performed by tearing the house down and throwing "40 yards" worth of debris out into the front yard.

On February 15th, two construction workers were injured when a brick wall they were demolishing collapsed on top of them. The workers were removed from the site by the NYC Fire Department and taken to Methodist Hospital. The DoB issued an immediate Stop Work Order on the entire job. A violation for "failure to safeguard public and property-Demolition ongoing in an unsafe manner causing two construction workers to be injured" was served as well.

On February 16th, the very day after the accident, the DoB, responding to neighborhood 311 complaints, found demolition work had resumed at the site in contempt of the previous days Stop Work Order. A violation for "failure to comply with stop work order" was issued.

On March 23rd, they were cited again for "failure to safeguard public and property".

Yesterday, October 4th the job was served with another Stop Work Order as excavation work was found to be progressing in an unsafe manner. 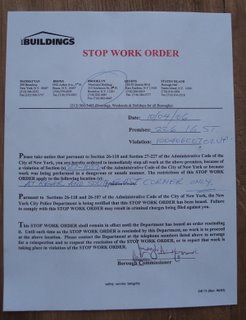 This week at the DoB we find their announcement of the recently enacted Rule 52 which requires permit holders to notify the D.o.B. at least 24 but no more than 48 hours prior to the start of earthwork/excavation. This notification is now required to ensure that work is being performed according to safety standards and to help promote safety on construction sites. Part of this new Rule 52 will include the unannounced auditing of a sample of all notices received by the Forensic Engineering Unit and Building Enforcement Safety Team (BEST Squad). They are to ensure that the developers engineer is on site and that all work is being done "per plan". They also will be checking for groundwater conditions, and that all underpinning, pile driving, sheeting, shoring, and bracing is done safely and to code. Sounds good on paper...Lets see how it works in the field when there isn't enough inspectors to do the work. It seems that DoB Com. Lancaster is finally figuring out that building a 4 story building in Brooklyn does not require the collapse of a neighboring property or the loss of a construction worker's life.
Posted by IMBY at 9:07 PM