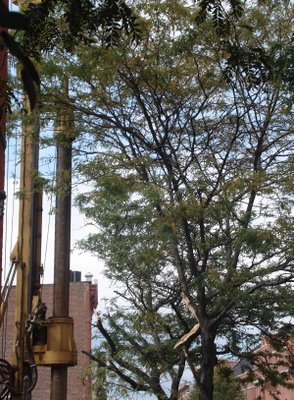 In less time than it took to grab the phone and dial 311, the contractors had peeled off the branches from the second of two street trees located inside the 406-408 construction site. A repeat performance of last weeks arborcide.

"All I remember was the sound of the backhoe's engine rev...The sound of the engine strain as the hydraulics kicked-in to lift the bucket-arm...And then the sound of wood crackling and splintered limbs falling to the ground... Two sucker-punches to the back of the head and the irreversible damage was done." 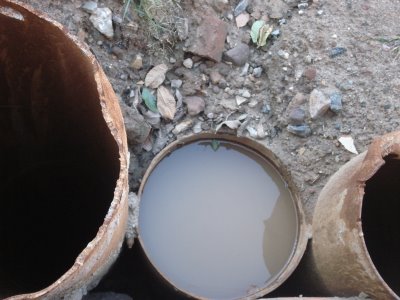 I got a chance to see the damage done to the first floor apartments in 1504 8th Avenue today. The sheetrock is actually being pulled apart at the seams. One can only guess at what the brick walls look like behind the drywall. Judging by how wide the crack is getting from the outside, you may actually be able to see all the way through to the interior in a short while. Many of the door jams are now out of plumb so you can't close the doors. The floors in the back bedrooms are sagging in the direction of the back yard. Rumors have it that the building may already be too damaged to be saved and will have to be demolished. The owner has installed plywood "drapes" over the vacant apartment's windows. Not a good sign. 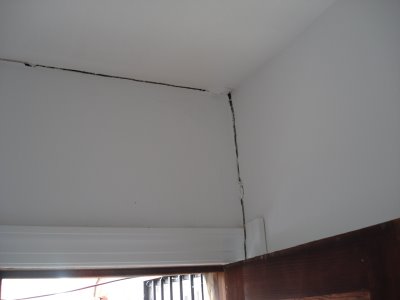 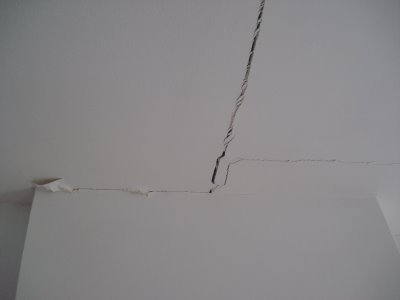 That is if the building doesn't blow up first. Keyspan was called to the building earlier in the week, narrowly averting disaster, after the next door neighbors smelled gas. The landlord claims the vibration from the drilling and the fact that his basement floor under his boiler is sinking may have caused the leak by straining the plumbing connections. It's scary when the people next door have to make the report. That's a pretty big leak.

Still two holdouts left in the building. Rogue contractors, crack addicted squatters, and natural gas leaks, and the last two tenants are still not ready to leave. I was under the impression that assisted suicide was illegal in this country. Someone needs to tell them that there are safer, easier, legal ways to hang onto your rent controlled apartment when it becomes uninhabitable. Leaving it to your next of kin is not one of them. 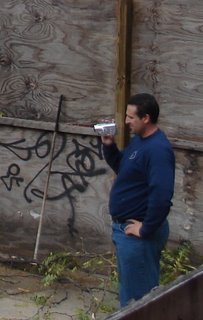 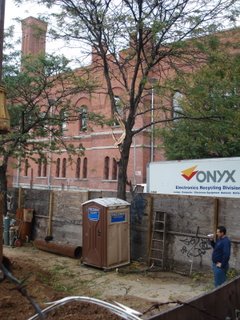 Sick-o Amateur Tree Crushing Video? No. My guess is that since they are currently being sued by the owner of the cracked-up 1504 8th Avenue, (a Mr. Arnold Rosenshein), the Armory Plaza Gang might be producing their own evidence showing the peaceful, all natural side of the IMT AF-80 drilling rig. Funny, that was the most quite I have ever heard that machine run as when they were filming it themselves. Did you know it's also possible to butter a saltine cracker with a chain saw? Answer to the puzzler next week.

Last but not least, Crack Monitoring Conspiracy Theorists are having a heyday over the possibility that the monitoring devices have been mysteriously falling off the wall, and for some, totally disappearing. Luckily not all the monitors have been "tampered" with. Only those indicating movement. The DoB has responded with a brand new effort using 21 century laser guided survey equipment and fluorescent spray paint to recheck the measurements. I'm a little worried about their penmanship. 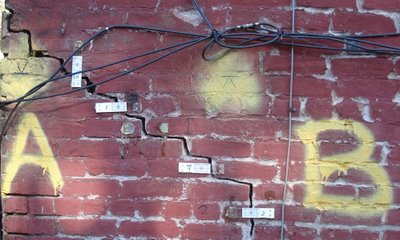 P.S. There is a small reward for anyone who finds my sense of humor.
Posted by IMBY at 2:46 PM