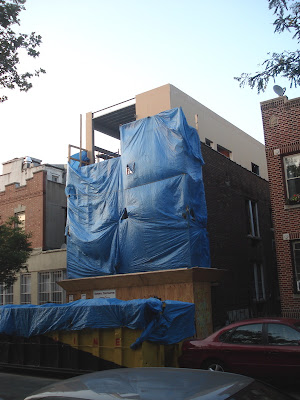 It still amazes me that even now with Department of Buildings inspectors swarming like flies over most of the shoddy building in the South Slope, contractors still choose to gamble with public safety and use cheap-ass construction practices. A Stop Work Order has been plastered on the construction fence outside 349 16th Street. This latest architectural folly is located between 7th and 8th Avenues and just a few doors down from the nearly completed Dimora Condominiums.

Malignant Alteration Type 1 tumors can spread by invasion and have already metastasized along parts of 7th Avenue. This case is still in the early stages of what's bound to be another synthetic-stucco-like growth adhering to the roof top of an already existing brick building.

Workers had draped a blue plastic tarp over a two by four framework out front to control brick and other debris as they demolished the facade. There is no protection at all(tarps in this case) covering the sides. The building is unattached and has a narrow alleyway between the neighboring property. 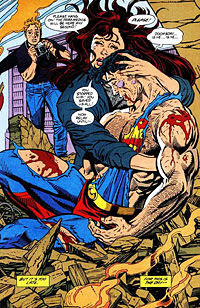 Doomsday
This blue plastic tarp looks pretty beat now. It's been shredded in places and, during the demolition of the parapet wall, there were times when pieces of Kryptonian brick shards passed straight through the tarp's supposedly indestructible aura on their way down to the ground, ending up on the unprotected sidewalk out front. Seeing that there are innocent children playing every where on this end of Metropolis, it doesn't seem wise not to have installed a plywood shed.
In contrast to 349 16th, the new Adamantium sidewalk shed currently shielding PS 107 on 8th Avenue is probably the most safety conscience and professionally executed installation I have ever seen in these parts. (The School Construction Authority unfortunately knows a thing or two about the destructive powers of a single loose piece of masonry.)

"They only lack the light to show the way."
There was a complaint made in reference to falling brick on July 18th which went apparently, nowhere. Another complaint made on August the 9th with a follow up inspection on the 31st, led to the subsequent Stop Work Order. The DoB has foiled them for now, restricting work from the 3rd and 4th floor front of the building.

Then again maybe they haven't. I think I'm finally understanding the contractors motivation for failure. The trick is to fuck up just enough to get slapped with a Partial Stop Work Order and not a true and total Stop Work Order. It's kind of like teenage boys having "Friends with Benefits". They get all of the rewards with very little responsibility. By dishing out these Partial Stop Work Orders it appears that the DoB is looking after the public welfare, while contractors also get a "legitimate" reason to receive a coveted After Hours Work permit. An emergency situation probably will require just a few extra Saturdays to finally get the job back under control again. After all, for them it's all work, whether it's on the front or back, first of fourth floor. If only they used their powers for good and not evil.

"Even though you've been raised as a human being you're not one of them. They can be a great people, Kal-El. They wish to be. They only lack the light to show them the way. For this reason – their capacity for good – I have sent them you… my only son." --Jor-El