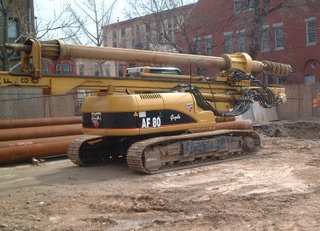 INDUSTRIA MECCANICA TRIVELLE (I. M. T.)
Through out April, the excavation crew has been experimenting with different shaped bits on the end of the I.M.T. AF80 DRILLING RIG, mounted on a CATERPILLAR hydraulic crawler base, or "Gazelle". This machine is being used to bore deep holes for the placement of hollow metal tubes or pilings that will eventually be used as the foundation for the new building.

At first they started boring with what looks like a traditional screw/ auger type bit on the end of the shaft, but changed to a different bit that reminds me of a masonry hole saw with small teeth.. They must have hit some kind of obstruction because the boring process is very quick for the first 15 feet or so and then it becomes very difficult. An AF 80 has a maximum drill depth of around 100 to 120 feet, and a drill diameter of 48'' maximum.

The drilling rig itself seems to be having lots of maintenance/mechanical problems. A crew of mechanics spent several days checking out something in the engine compartment. Welders arrived on the scene and made repairs to the auger bit but then a few days later they had to change the auger bit again. The reason for all these changes? It may have something to do with the fact that they have been drilling in the same hole for several weeks and may be having trouble punching through some kind of geologic debris field. They also seem to have hit an underground water source. Personally I would not be surprised if this was the first foundation they have done using this method. I think they may be making it up as they go along. 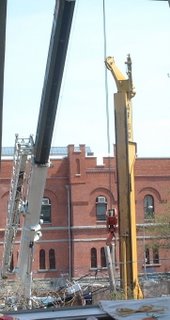 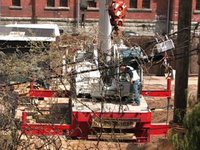 Yesterday, April 25th, an enormous crane showed up to try and free the rig that had somehow got stuck in the Earth, which explaines why there had been no drilling recently. It seems the steel cable from the main winch that lowers and lifts the shaft on the drilling rig snapped and they had no way to raise it with out the help of this big crane. The work took several hours and the crane was able to pull the shaft free from the muck. The heavy rain from earlier in the week had left the ground saturated and was pooling at the lowest point of the lot...at the point where the rig was stuck. 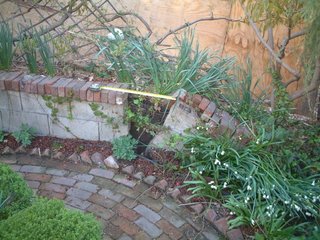 Unfortunately, about 30 minutes after the crews quit for the day, the huge Hell Hole they made just outside my rear property line began to swallow up my cinder block retaining wall, several flower pots, a wisteria tree, the telephone pole, and my 15 year old WEEPING JUNIPER tree. At first a small crack appeared in the cinder block. Then a small inverted cone began to form under the base of my Juniper. This funnel shaped cone became larger as more and more ground collapsed from below the surface, until suddenly daylight appeared at its center point. You could see the reflection of the sky in the water below. A small layer of bricks and soil formed a bridge at the rear of the hole. 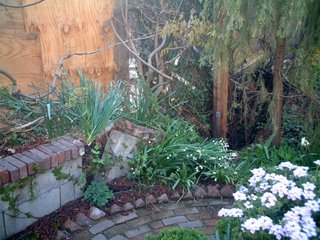 In slow motion, an 8' section of the retaining wall began to sink into the right rear corner of our backyard, hinging from this center crack. You could hear loud "kerplunk" sounds as bricks and stones fell into the small lake behind the construction fence. By nightfall the crack had widened to 18'' and a significant hole opened up in the ground beneath the tree. The telephone pole was being supported solely by the cable wires with its base floating free in the water. By pulling free the stuck drill shaft they had undermined the wall and created a sub surface void.

Seeing that the workers had quit for the day and there was no Emergency Phone Numbers listed on the construction fence, I called 311. The operator decided to transfer my call to the 911 operater instead believing that a telephone pole swaying in the wind was an emergency situation . Two police officers from the 72nd precinct promply came over and decided that it was indeed a dangerous situation, but seeing as there was nothing they could do personally to correct the problem, recommended calling 311 again. This time a complaint (#318-8829) was logged describing the foundation work which lead to the undermining of my rear property and the susequent collapse.

The next morning an inspector came out from the Brooklyn Department of Buildings to look at the damage. The inspectors name was James Barker and he spoke to the construction foreman at great length, who assured him that they would personally make sure that my property was made safe and that all repairs would be made to return it to its prior condition. This was to include rebuilding the construction fence.

By now the crack was two feet wide, with 7 feet of the 8 foot section of my retaining wall pulled down beneith the ground, Overnight we had gotten rain and some strong winds, which excellerated the errosion of the sink hole. The construction fence was bowed out and the chainlink fence post was hanging in mid air, bent backwards by the force of the wind and the weight of the concrete footing still attached. 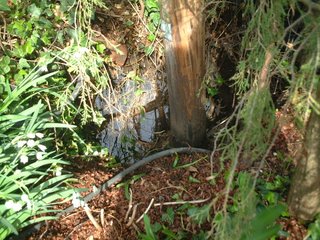 My neighbors Rose of Sharron had dissapeared almost completely below the water line with just its uppermost leaves showing. The roots of the juniper were now exposed, and some of the red clay bricks on the circular walkway were beginning to pull apart at the mortar joints. 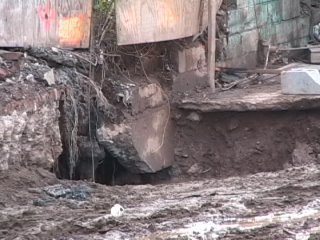 The DOB inspector was very concerned with the damage and lack of shoring behind the property. There is a natural difference in the heights of my property compared to 406 15th Street, of some four feet. Now with the excavation the difference was nearly at a 6 foot drop. The building inspector requested that the hole be refilled asap and that everything be returned to a normal safe condition. The Department of Buildings issued this violation, #042606CO7JB01. 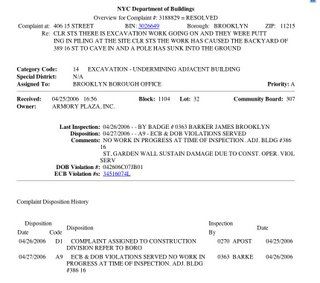 They used the tiny purple backhoe to move the topsoil back into the water hole and to upright the 20 foot section of plywood. 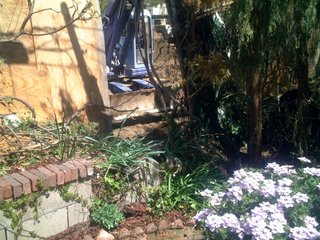 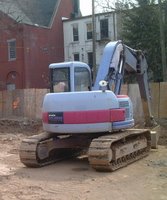