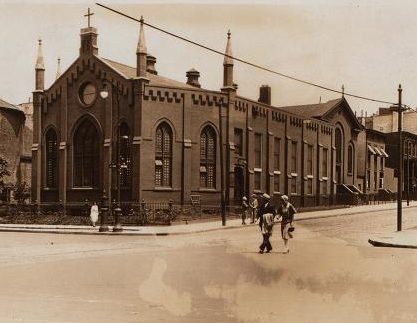 I came across this photo while browsing through the New York Public Library's Digital Gallery. It was taken on July 4th, 1930 by the photographer Percy Loomis Sperr. On the back is written in pencil "Norwegian Evangelical (Free ) Church". During the mid 1800's, Scandinavian immigrants began settling in South Brooklyn below Fourth Avenue in large numbers. 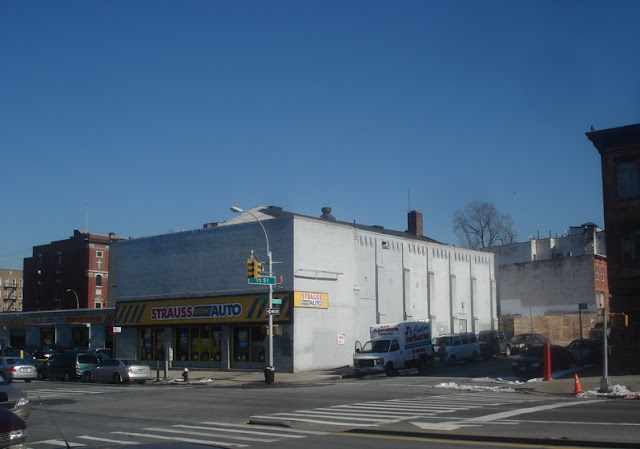 Today the corner of 15th Street and Fourth Avenue is home to a Strauss Automotive Center, but if you look at the Fifteenth side facade of the building, you can still see that the rear portion of the original church still survives. Although the large rectangular window openings have been bricked up, the lintel stones are still in place. The brick buttresses between the windows as well as the decorative detail work along the roof line contrast the additional alterations added over time along Fourth Avenue. In the early 1940's, maybe as soon as September 1944, they stopped doing baptisms and began performing oil changes, as a temporary Certificate of Occupancy on file within that year allows for the premises to be used as an "auto showroom". This conversion from church to showroom coincides with the time when many Norwegians began leaving the old, crowded neighborhoods of Red Hook and Sunset Park for the greener pastures of Bay Ridge. 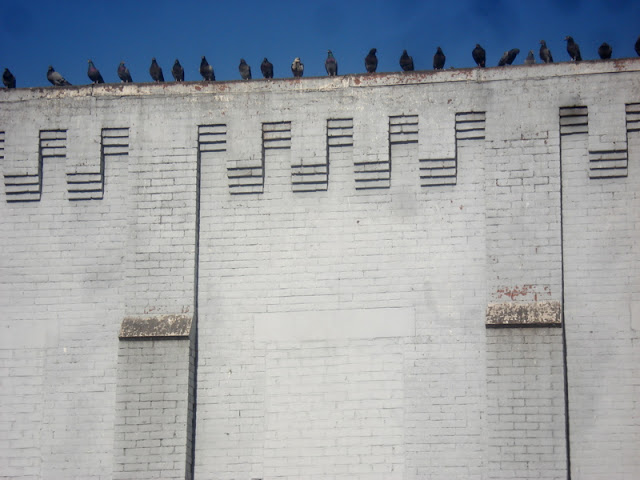 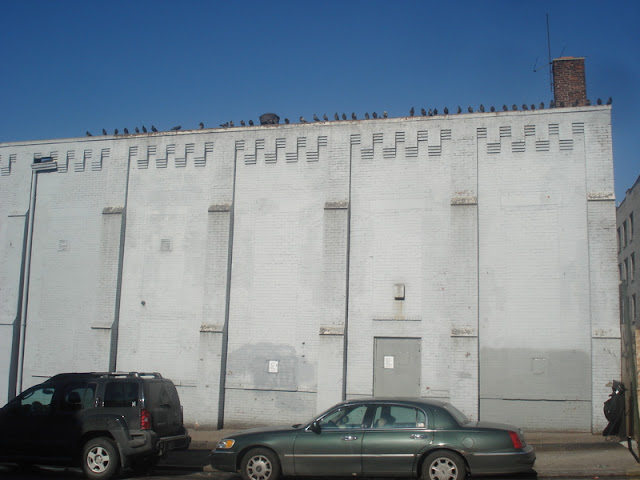 Detail of the bricked up windows and decorative brick motif.
A congregation of pigeons does its best to keep the walls looking nice and white washed. Pictured above from left to right: Kjelfrid, Lovise, Nina, Ingrid, Gunnhild, Margrethe, Trude, Solveig, Benedikte, Borghilde......... 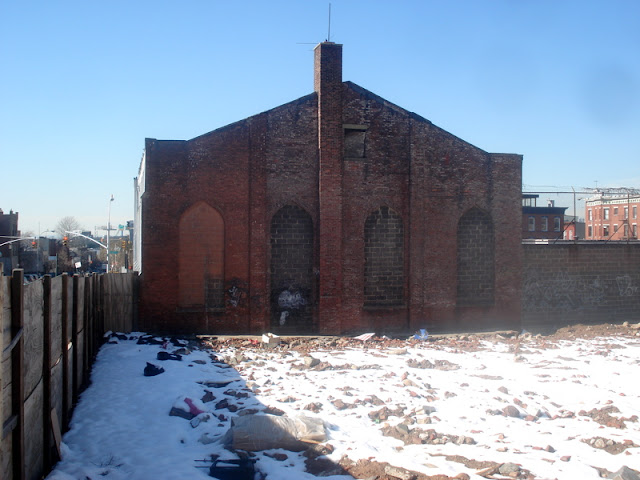 The rear facade is now visible after the recent demolition of the Holy Cross Polish National Catholic Church and Rectory next door. The properties, 155-161 15th Street, were sold in 2007 to a developer for $3.85 million. He plans to build 21 housing units with 14 off street parking spaces. For a time capsuled, virtual street view of the Church and Rectory, you can click here and visit Google Maps.
This rear view shows the same Gothic styled, arched windows used in the front of the building. From here we can see the original chimney and metal roof vents, visible in the 1930 photo, are still in place.
I wonder if the two churches always existed side by side, or if the two buildings were ever used in the past by one denomination? The now demolished Holy Cross Church's front facade is barely visible in the 1930 photo. Visually, the roman styled arches and broken-based pediment of Holy Cross contrasts it stylistically from the neighboring Norwegian Evangelical, which makes me think that they were always separate. Anyone know any Catholic Polish Nationals in their 90's who grew up in South Brooklyn? 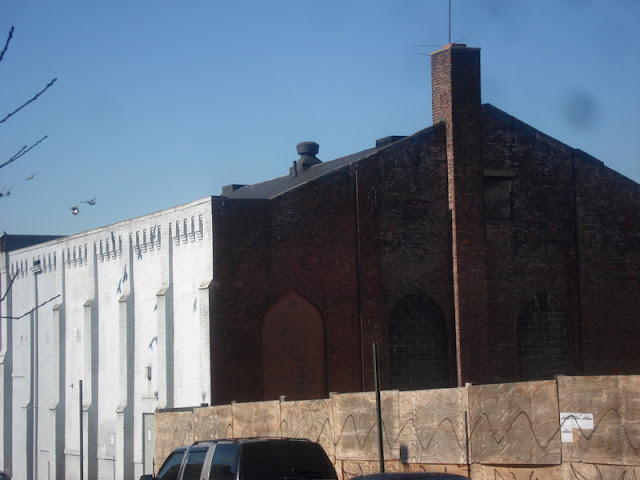 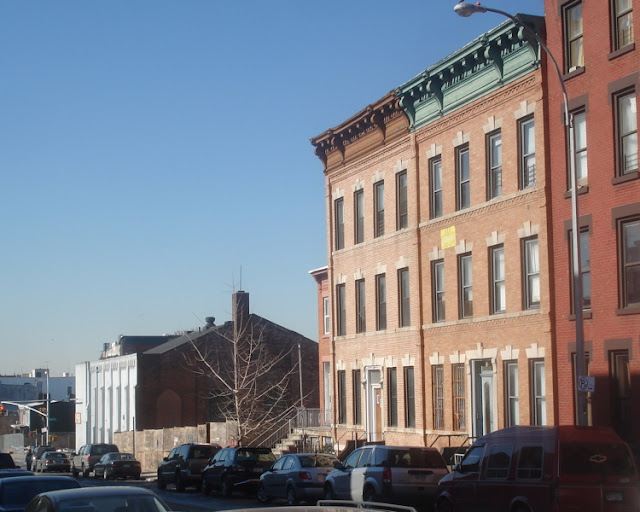 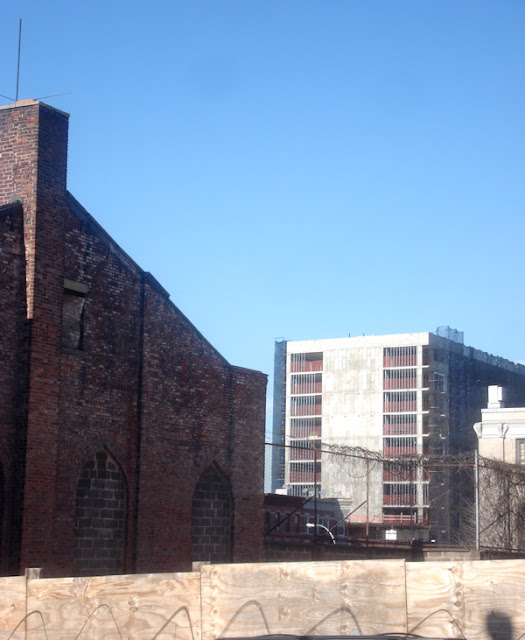 Looking East Down 15th Street. In the distance you can see another new development still under construction along Fourth Avenue. That I believe is the "Olive Garden Building" on the right.

For more history on the migratory patterns of Brooklyn's Norwegian population click on the Lingonberry photo. 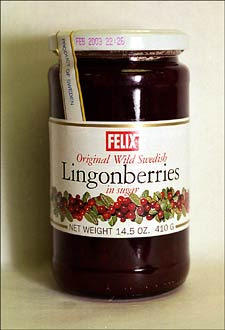